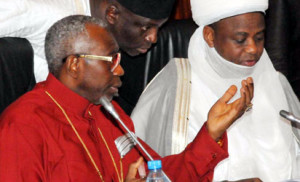 Nigerian political, religious and security leaders have come up with a verdict that Boko Haram, a deadly group that has been engaged in terrorism in mainly North Eastern part of the country has nothing to do with Islamic religion.
The expanded security meeting which held today at the Presidential Villa, Abuja, with President Goodluck Jonathan, Vice President Mohammed Namadi Sambo, security cheifs, religious leaders, including the Sultan of Sokoto and President of Chritian Association of Nigeria (CAN) concluded that Boko Haram has been killing both Muslims and Christians in its deadly attacks.
Briefing state House shortly after the meeting which held from 12.10 noon to 6.40pm today, the leaders, led at the briefing by minister of defence, Lieutenant General Aliyu Gusau said that they were unanimous in condemning the increasing spate of deadly activities of not only Boko Haram but kidnappers, armed robbers and other criminals across the country.
Others who briefed the newsmen were the Niger state governor, Babangida Aliyu, Ekiti state governor, Kayode Fayemi, Abia state governor, Theodor Orji and Borno state governor, Kashim Shettima.
The meeting, they said, agreed that “Boko Haram is not a religious war because they attack and kill both Muslims and Christians.”
They said that the meeting took a look at a memo written by Adamawa state governor, Murtala Nyako to his Northern colleagues and unanimously condemned it.
Governor Nyako, they said, was given the chance to read the content of his letter at the meeting at the end of which the leaders condemend it.
The meeting autioned leaders to be careful about what they say in public so as not to encourage terrorists, adding that they thrive in an environment where there is conflicts amongst the leaders that should have united to fight them.
In the same vien. The meeting asked media practitioners to be compassionate about the unity of the country in matters concerning terrorists and the nation.
The meeting also resolved to establish preaching board in each state of the federation to regulate both Islamic and Chritian religious preachings as a way of stemming instigative ones.
The leaders set up a committee to work out details of move to domesticate Fulani pasturalists to stem frequent clashes between them and farmers in their areas of residence, even as they resolve to abbrogate the issue of state indigenship that has made some people settlers in states they have spent almost all their live times.
Names of the committee members were not disclosed at the briefing, even as questions were not entertained from the newsmen.
“We stress the need for wholistic measures to stem terrorism, including anti poverty strategy, soft approach in addition to hard approach that has been in operation through deployment of Joint security Task Force.”