Home NEWS POLITICS If I Am Not Doing Well, It Means I Am A Bad... 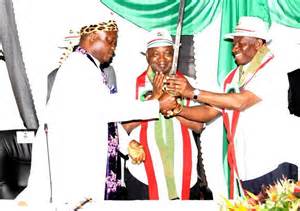 President Goodluck Jonathan has asked the people of Cross Rivers State to tell him what he may not have done right for them and that as a son of the state, if there is something he had not do well, it meant that he is a bad child who should then be called and put right.
Addressing members of the state council of traditional rulers at the Government House, Calabar shortly before his campaign rally, he said he was not in Cross River State to campaign since he is already part of the people.
“I am not doing campaign because I am part of you. If I am not doing well, it then means I am a bad child and all you need to do is to say ‘you have not done well in this area, you have to look through this area.’ I promise that I will do my best to make sure that whatever is due to this state is given to it.”
President Jonathan said that he and his delegation were in the state to ask for their support because of their belief that his administration had taken some positive steps in its transformation agenda and that additional four years would afford the administration the opportunity to “put things at a reasonable level.”
The President said that Tinapa project has not fully taken off judging by the vision of the state government, adding that when the project is fully functional, it would provide a lot of opportunities for the people.
Jonathan said that the issue of a viable seaport port is one of the hindrances for the take off of the project and therefore promised that when re-elected, he would ensure the dredging of the Calabar Port and work with the leadership of the state to ensure its proper take-off.
Also speaking at the occasion, the National Chairman of the Peoples Democratic Party ( PDP), Dr. Adamu Muazu, promised that the next Jonathan administration would ensure that the traditional institution gets its rightful place as it would be formalised under the constitution.
He presented president and Vice President Namadi Sambo to the Cross River royal institution and the people of the state, asking for their “blessing, support and much-needed prayers.”
In his remarks on behalf of Cross River State the traditional rulers, Chairman of Cross River State Traditional Council, Dr. Okon Etim, assured the president that the state was the surest state for the PDP in the coming election.
He said Governor Liyel Imoke of the state has already given them a charge to deliver Cross River to President Jonathan and the PDP, urging however that when re-elected, the president must fulfil his promises to the state.
“We know where we are going and there is absolutely no confusion about it. Our governor, Liyel Imoke is a master tactician and strategist. He has already given us a charge.
“The average Cross Riverian has hope that you will do something for us,” he said, while encouraging the president to go into the election without fear as he observed that the Lord was with him.
“Because the Lord is with you, you have nothing to fear. We assure you that we are going to support you and when you go there for a second term, do not forget Liyel Imoke, do not forget Bakassi, and indeed, do not forget Cross River state.
“As traditional ruler, you are the only president we have seen all this time. I’m the spokesman of South South Traditional Rulers forum and a strong member of the national traditional rulers council. I can assure you therefore 85 percent of traditional rulers are with you.”
President Jonathan later commissioned the Goodluck Ebele Jonathan Bypass, a 6.8 kilometer airport dual-carriage way constructed by the Imoke administration, which the governor explained, was built with an interchange on a swamp.
Jonathan said the idea of the bypass symbolised the great story of the PDP’s visionary leadership and thanked the people of the state for immortalising him.
He prayed that before he leaves office, he would have the opportunity to do more things that he would be remembered for. [myad]