Home NEWS POLITICS What We Have Now Are Jonathan’s Soldiers, Policemen, Not For Nigeria-Lai Mohammed 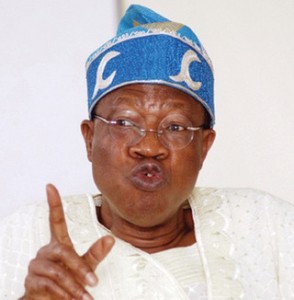 The national publicity secretary of the opposition All Progressives Congress (APC), Alhaji Lai Mohammed has said that Nigerian security operatives have now stopped working for Nigeria as a nation, but have constituted themselves into what he called President Goodluck Jonathan soldiers, policemen and DSS officials.

In a press statement shortly after he was released from detention in Osogbo, capital of Osun state, where governorship election is currently ongoing, Lai Mohammed regretted that he was arrested along with other APC Chieftains for no reason other than they were in opposition.

“The way and manner we were harassed, arrested and dehumanized on Friday night show that Nigerian citizens can no longer be sure that the security agents they encounter on the roads or anywhere else are well-trained and highly-disciplined men and women in the military, police, DSS and others that we used to know. What we have now are Jonathan’s soldiers, policemen and DSS officials who have since stopped working for the nation but are now the enforcement arm of the PDP.”

The APC said that he was arrested in Gestapo Style by hooded security agents in Osogbo on Friday night, adding that the incidence has shown the level of illegality, lawlessness, anarchy and intolerance to which Nigeria has descended under the watch of President Jonathan.

He said that he was arrested along with Mr. Sunday Dare, the Media Aide to APC National Leader Asiwaju Bola Ahmed Tinubu, and Mr. Afolabi Salisu, Deputy Chief of Staff to Gov. Ibikunle Amosun of Ogun State.

”We were being driven to the Government House when we were stopped at a military check point by men in military and DSS uniforms, all hooded and armed to the teeth with AK-47 assault rifles, pistols and other weapons. Since there was no curfew in Osun state and people were moving around freely, we felt it was a routine check.

”Suddenly, the men, some of them apparently drunk, ordered us out of the car, took our phones, pointed their assault rifles at our heads and said ‘you are under arrest’. They herded us into their bus like animals and drove away. There is no doubt that they knew who we are because I introduced myself!

”From our encounter with our tormentors, there is also no doubt that these were not just soldiers and DSS officials, there were also ex-militants and thugs, all clad in military and DSS uniforms but apparently lacking in any training! We also witnessed how men in military and DSS uniform fired their guns at the gate leading to the residence of Senator Isiaka Adeleke to force it open!

”We asked them why we were being arrested, but they ignored our question as they drove for close to one hour before veering into a compound that turned out to be the offices of the DSS. There, we met people who had been previously arrested and stripped of their clothing, many of them bloodied from the beatings to which they must have been subjected.

”We were herded to one side as our tormentors marched around triumphantly, in what could well have been a scene from the Ukraine! We were waiting for our turn to be stripped of our apparels and taken along with those who were arrested earlier to the DSS cells when a man who is apparently a senior DSS official intervened and ordered our release. The men who arrested us, apparently unhappy at the order to set us free, rejected the order, until the man asserted his authority and even accompanied us to where we were arrested from.

”Back there, we discovered that our driver has been badly beaten and even robbed of his personal belongings by the same security agents being paid by the taxpayers to protect the citizens, whose ranks have now been swelled, willingly, by thugs and ex-militants, armed and dressed in official uniforms by the PDP and sanctioned by the Jonathan-led Federal Government!

”This arrest is not about Lai Mohammed, Sunday Dare or Afolabi Salisu, whoever we may be, but about the constitutionally-guaranteed rights of Nigerians, ordinary Nigerians, to move around freely, associate with any party of their choice and express their opinions without being molested or arrested.

”The way and manner we were harassed, arrested and dehumanized on Friday night show that Nigerian citizens can no longer be sure that the security agents they encounter on the roads or anywhere else are well-trained and highly-disciplined men and women in the military, police, DSS and others that we used to know. What we have now are Jonathan’s soldiers, policemen and DSS officials who have since stopped working for the nation but are now the enforcement arm of the PDP.

”As we write this, APC leaders and members are still being harassed and arrested across Osun State. We have just received reports that our members were arrested in Ifelodun Local Government Ward 10,.Atakumosa East Local Government and Ife East Local Government, Okerewe Wards 2 and 3. Over all we have ninety-seven leaders of our party in detention and the arrest has not stopped. This cannot be right.

”If those Ministers can move around freely in Osun and elsewhere, why can’t other Nigerians, irrespective of the party they belong to? If a PDP hireling like Chris Uba can be put in the command of 50 soldiers of the Nigerian Army, why should anyone still be under any illusion that the Nigerian Army is still serving the nation? Where else in the world is a thug commanding disciplined forces?

”We, Lai Mohammed, Sunday Dare and Afolabi Salisu, are just fortunate to be alive. The guns pointed at our heads by drunken armed men could have gone off! Since our arrest took place in the dark, we could have been driven to an unknown destination and shot dead! This is a dangerous time for Nigeria and her democracy. Irrespective of the outcome of the Osun election, democracy has been dealt a near-mortal blow. 73,000 ‘security agents’, including the military, police, DSS, Civil Defence, ex-militants, thugs and murderers, deployed to police election in just one state? There is no better indication that we are in a militarized democracy.

”Again, we call on President Jonathan to stop deceiving the world. In one breath, this President says he is committed to credible elections and that his political ambition is not worth the life of any Nigerian. In another, he sanctions state-sponsored harassment, intimidation and even killing of ordinary Nigerians by security forces that are now the enforcement arm of the ruling party, all in the name of politics.

”He desecrates national institutions by willfully using them against the opposition. This is not the democracy that many of our compatriots fought and died for. This is not the Nigeria that was envisaged by our past heroes. It is time for all concerned to step in and stop President Jonathan before he brings the country crashing down on our heads,” APC chief spokesman concluded. [myad]