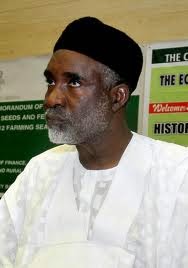 There were indications that former President Olusegun Obasanjo prevailed on President Goodluck Jonathan to stop Adamawa state House of Assembly from going ahead with impeachment process on Governor Murtala Nyako.
Observers concluded that the presence of Obasanjo, for the first time in a long time, at the National Council of State meeting in the Presidential Villa, Abuja today was not a coincidence as the embattled governor also made a surprised presence.
Political watchers said that Obasanjo personally asked Governor Nyako to come for the meeting so that he would seize the opportunity to speak to President Jonathan on his behalf.
It would be recalled that the emergence of Governor Nyako and President Jonathan was the handiwork of Obasanjo, who believe that he still has a big role to play in the official lives of the two personalities.
Governor Nyako, who left the immediately after the meeting, refused to speak to newsmen.
“I don’t want to talk please,” Nyako said as he walked briskly pass the journalists.