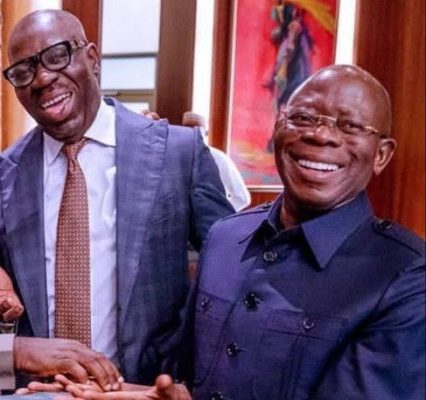 The Edo State Governor, Godwin Obaseki and his predecessor, Adams Oshiomhole have reconciled their differences saying that they are brothers with common interest to develop the State.

Obaseki on his own, said that he has no personal grudges against  Oshiomhole, but that he only dislikes his style of politics, even as Oshiomhole described describing Obaseki as ‘his brother and friend.’

The two political leaders on diferrent political platforms, met today in Auchi, Etsako-West Local Government Area of the state, at the Centenary Birthday Thanksgiving of Thomas Oleghe and 18th Canonical Erection Anniversary of the Diocese of Auchi.

At the meeting Obaseki and Oshiomhole exchanged greetings with an elbow-bump in compliance with coronavirus preventive protocols.

Governor Obaseki emphasized that Oshiomhole, who is the immediate national chairman of the ruling All Progressives Congress (APC) and him are both sons of Edo with the interest of the state at heart.

Oshiomhole, who was a guest at the event, commended Governor Obaseki, saying: “once the governor speaks, the matter ends.”