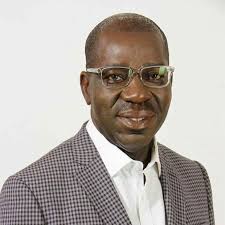 Edo State Chairman of the All Progressives Congress (APC), Anselm Ojezua, has said that despite the disqualification of Governor Godwin Obaseki by the party’s Primary Screening Committee, he will go on to win the next election to complete his second term.

“They (the committee members) didn’t say Obaseki will not contest the election but that he will not contest on the platform of the APC. Obaseki performed well and will be re-elected for a second term.”

The party chairman, who spoke to news men in Benin City today, June 12 after the announcement,  said that the result didn’t come as a surprise as the governor had alluded to the fact that he will not get justice from the screening exercise.

The APC chairman appealed to the supporters that leadership of the party will meet on Saturday to properly respond.

“I want to appeal to leaders and members of APC in Edo State to remain calm. The validity of the Screening Committee has not been established.”

We Disqualified Women Affairs Minister Because Of Her Doubtful Loyalty – Oshiomhole