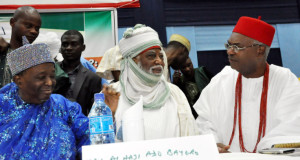 “I held Alhaji Ado Bayero, the Emir of Kano, in the highest esteem as an honest, wise, compassionate, and courageous leader of all times,” Obi of Onitsha, Igwe Alfred Achebe has declared.

In a tribute to the late Emir who passed on in the early hours of yesterday, Igwe Alfred Achebe said that Alhaji Ado Bayero was a great monarch, whose positive influence during his long reign transcended his domain to the entire country and beyond.

In a statement in Onitsha, Anambra, signed by his Palace Secretary, Mr. Nwolisa Agusiobo, Igwe Achebe, who is currently outside the country, noted that Alhaji Ado Bayero loved and gave his all to his people of Kano.

He asked Nigerians to immortalize the late Emir by advancing his ideals of bridge-building among various tribes, ideologies and belief, adding: “the greatest tribute we can pay to our beloved departed monarch would be to fiercely uphold and advance his ideals of bridge building through peace, love, fairness, and respect for one another.”

He consoled the family of the departed Emir, the Kano Emirate, and the entire country and prayed to Allah to grant him eternal rest. [myad]