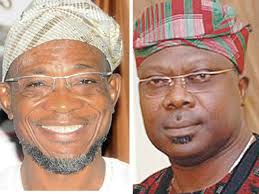 Results of the Osun state governorship election, conducted by the Independent National Electoral Commission (INEC) today in the state have shown that the incumbent governor, Rauf Aregbesola of All Progressives Congress (APC) is in the early lead.
The few results declared publicly by INEC after the counting of votes, showed that Aregbesola is leading in Ward 02 in 014 polling unit of Oniso compound
In Ede North with 59 votes cast out of 112 accredited voters, while his closest rival, Senator Omisore got 37 votes with 7 votes voided. Others were APGA with 07, ADC 01, PDN 01, ACPN 02 and NNPP 02 votes.
Aregbesola also won in Ward 09 in 009 polling unit in Ojularede open space of Ede North with 33 votes as against Omisore’s 26 votes out of 65 accredited voters. In Ojisun polling unit 007, out of 159 accredited voters, Aregbesola got 85 votes while Omisore got 63 votes and seven votes were voided.
In ‪Ilesa west ward 6, Araromi unit 4, Aregbesola got 138 votes while Omisore got 63 votes.
In Ibodi, it is 300 votes for Aregbesola’s APC and just three for Omisore’s PDP while APC also got 95 votes in Lemodi as against PDP’s 25.
In Ijoka in Ilesha, APC got 150 votes while PDP got 30 and in Orita Kajola in Ilesa, APC got 265 vote and PDP got 65.
others are: