Home FEATURES Our Main Objective Is To Defeat Buhari In 2019 – Atiku, Makarfi 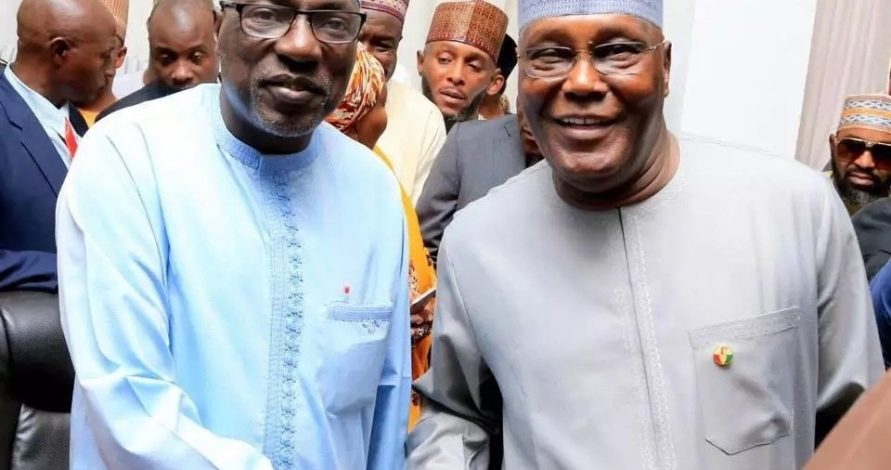 Two Presidential aspirants on the platform of the Peoples Democratic Party (PDP) in the 2019 election, former Vice President Atiku Abubakar and former Kaduna state governor, Ahmed Makarfi have said that the focus of all those contending to fly the flag the PDP is to focus on the objective of defeating President Muhammadu Buhari and his All Progressives Congress (APC) in next year’s general election.
The two PDP presidential contenders spoke today, Saturday when Atiku paid courtesy visit on Makarfi at his Kaduna residence in continuation of his nationwide consultations ahead of the party’s primaries next month.
Atiku described his visit significant and special, adding: “I feel it is absolutely necessary being a colleague and also the former chairman of the party who actually brought about the current structure of the party and leadership into existence.
“First of all, to put it on record and to also commend your leadership, for the fact that you were able to, at a very critical time in the history of this political party steer the affairs of the party. That you presided over the emergence of the leadership in a very democratic process clearly shows your leadership qualities that we must all acknowledge and commend.
“So, I came to publicly pronounce that and to commend your leadership and to tell you that I hold you in very high esteem. The fact that you have been able to do that clearly also indicates that you have a lot of potentials to offer to this country that cannot be taken away from you.
“Again, here you have another historic role to play, having belonged to the same political set with me that ushered in democracy in 1999. I believe that since we are still active and healthy, we still have the responsibility that the democracy that we brought back can be sustained in a manner that will bring about progress, development and unity of the country.
“I will like to appeal to you that we continue to work together like we have done before in this country so that we can sustain our democratic process which should lead us to progress and developmet for the benefit of our people.
” We are now at crossroads in this country, because you can definitely acknowledge since the return of democracy we have not had a worst period than now in terms of economy, security, or unity; this is the worst since 1999. I think and believe that if we work together, we will return this country back to the path of peace, stability, progress and development.”
Responding, Senator Makarfi welcomed Atiku home, recalling the early meetings and struggles between 1998 and 1999, the critical meetings that took place at Atiku’ residence when the two of them were governor-elect.
Makarfi admired the dogged spirit of his guest, commending for returning to the PDP without asking for any concession, adding “as a democrat who likes to work for what he earns, you have been working hard which is very commendable. I give you credit for that.
” As you mentioned, this should be seen as a collective issue because we all have our individual interests but our interests should be subsumed by the larger collective interest, and even within that collective interest, the issue of justice, fairness, equity and the need to really do what is in the overall best interest of everybody.
“You are capable. As one of the candidates that are seeking to fly the flag of the party, we have a lot of capable candidates in the PDP but even among all the capable, for me, I am a team player who can work and settle on whatever way with others.”