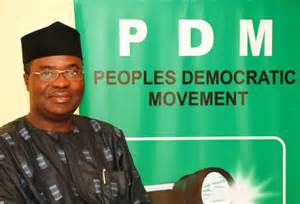 The Peoples Democratic Movement (PDM), an offshoot of the ruling Peoples Democratic Party (PDP) has adopted the Presidential candidate of All Progressives Congress (APC), General Muhammadu Buhari as its Presidential candidate in the February election.
This decision was taken at the end of the meeting of the PDM’s National Executive Committee (NEC) held at the National Headquarters of the Party in Abuja. The meeting was attended by members of the National Working Committee, State Chairmen of the Party from across the federation and invited Party Elders. Later. The NEC also met with its candidates for various elective posts from across the country.
In a communique signed by the party’s National Chairman, Bashir Yusuf Ibrahim and the National Secretary, Ifeanyi Igwe, PDM said the NEC and the party’s candidates “unanimously resolved to support the candidature of General Muhammadu Buhari for President of Nigeria and called on all members and supporters of PDM across Nigeria to vote for him in the presidential election of February 14, 2015
“NEC reviewed the Party’s preparations for the February 2015 General Elections and NEC noted that the Party has no candidate in the presidential election of February 14, 2015. It considered and accepted the need to support a candidate in order to save Nigeria from imminent collapse and give it a new lease of life. It also noted that the Party had registered close to six million members both manually and online and resolved to deploy this voting strength for good and in the best interest of Nigeria at this very critical time.
“NEC observed that of the available presidential candidates, two clearly stand out and the two represent a clear contrast and reference point for making a clear and informed choice. On the five critical issues which NEC believes constitute the nation’s top and urgent priority at this material time, namely, National Unity, Public Security, Job Creation, Fight Against Corruption and the Economy, it is the opinion of NEC that the incumbent who has been at the helm of affairs of the nation in the past six years had failed. In contrast, his opponent had a track record of achievement in these areas as a former Head of State and, later, Executive Chairman of Petroleum (Special) Trust Fund. NEC believes it is time for Nigerians to give him a chance.
“NEC also reviewed the State of the Nation and expressed concern with the deteriorating state of insecurity in the country, especially in the North East where insurgents appear to have a free reign killing and displacing innocent citizens and taking over the nation’s sovereign territory. It commiserated with the victims of insurgency in the affected states and called on the Federal Government to discharge its responsibilities to Nigerians by guaranteeing the safety of their lives and property and retrieving the nations’ lost territory within the shortest possible time.
“NEC noted the rising level of corruption, unemployment and impunity in the country and condemned the campaign of calumny and hate by prominent citizens who are desperate to win election at any cost, including plunging the nation into chaos and anarchy. It called on Nigerians to reject desperate politicians who have been given a chance to prove their worth but failed. It noted that Nigeria’s democracy had come to stay and would not be undermined by the desperation of those who are afraid to lose election in February 2015.” [myad]