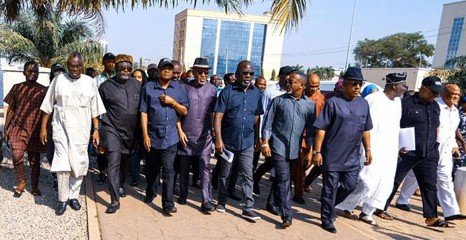 The Peoples Democratic Party (PDP) has cried out to the United States, United Kingdom, and the European Union to intervene and upturn the judgement of the Supreme Court on Emeka Ihedioha as Governor of Imo State.
Chairman of the party, Uche Seconds and other leaders, who marched on Abuja streets today, January 31 in their continued protest against the judgement of the apex court, begged the international community “to come to the assistance of our dear country.”

Chairman of the part’s National Working Committee (NWC), Secondus, who led the street protest said: “on behalf of the PDP and the masses, we call on the international community to come to the assistance of our dear country.

“The content of our letter is for international community to advise our government to obey the rule of law particularly as it relates to National Assembly and judiciary.”

Secondus noted that President Buhari was overwhelmed with the security challenges in the country.

The protesters started the street march from the party’s national secretariat, and walked through some streets of the nation’s capital to the embassies where they submitted their petitions.
Those who took part in the protest include members of the PDP National Working Committee (NWC), Board of Trustees (BoT), and National Assembly, among others.
The National Organising Secretary, retired Colonel Austin Akobundu, had hinted in a statement yesterday, January 30 that movement during the demonstration would be by individual vehicles in a peaceful and non-violent manner.
He said: “In continuation of our protests as ordered by NEC, the National Chairman has directed that all members of the NWC, BOT, leadership, and members of the National Assembly, and other critical stakeholders of our great party would be presenting our petitions to the embassies of the United States of America, United Kingdom, and the European Union on the State of Affairs in the country.

The apex court had on January 14, 2020 declared Hope Uzodinma of the All Progressives Congress (APC) as the duly elected governor of the state, thereby bringing Ihedioha’s reign to an abrupt end.