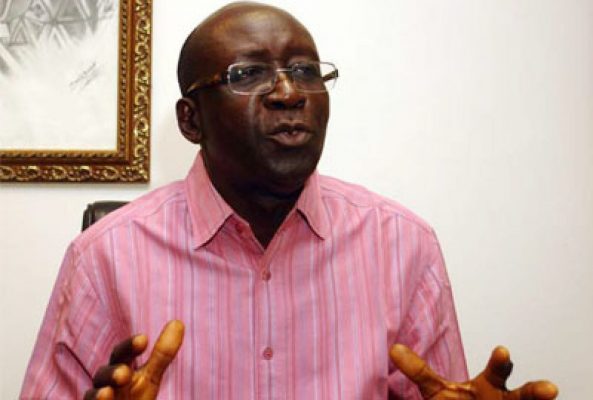 The National Chairman of the Peoples Democratic Party (PDP), Dr. Iyorchia Ayu, has visited the new acting chairman of the Board of Trustee (BoT), Senator Adolphus Wabara and asked him to help him beg the Governor of Rivers State, Nyeson Wike and other aggrieved party chieftains to sheath their swords and embrace peace.

Senator Ayu, accompanied by other National Working Committee (NWC) members, pleaded with Wabara, who is the former senate president, to use his diplomatic skill to beg Governor Wike and other Governors and aggrieved members of the party to forgive and forget for the purpose of moving the party forward to the next level.

The PDP Chairman described the new BoT Chairman as an elder statesman of immense experience, stressing that the PDP needs his diplomatic skill to wade through its crisis.

He begged the new BoT chairman to reach out to Governor Wike and all aggrieved party members with a view to presenting a united front against the All Progressives Congress (APC) during the election.

Senator Ayu hinted Wabara that the leadership of the party had agreed to travel to Port Harcourt early next week to meet with the Rivers State Governor for what he called “full reconciliation.”

He however added that because of other preplanned engagements, the Deputy Chairman (North), Ambassador Iliya Damagun, will be leading other members of the NWC on the trip as he would not be available.

Ayu thanked Wabara for the Vote of Confidence passed on the party leadership by the BoT and the National Executive Council (NEC), adding that it has affirmed the party’s unity among other things.

“To read the outcome of yesterday’s meeting as one group being victorious over another will be erroneous. We are all winners.

“My understanding is that the party wants unity. Thankfully you can play the role of a unifier even better with your immense preparation as a diplomat, former Member House Of Representatives, former senator and ex-Senate President who had worked with this party for a long period of time.

“I am calling on you to lead the effort in reaching out to all our aggrieved members. You have the full support of myself, the candidate and the whole NWC to reach out to Governor Wike, all the governors and any person who is aggrieved, and appeal to them, plead with them to come back and let’s work together in the PDP family.”