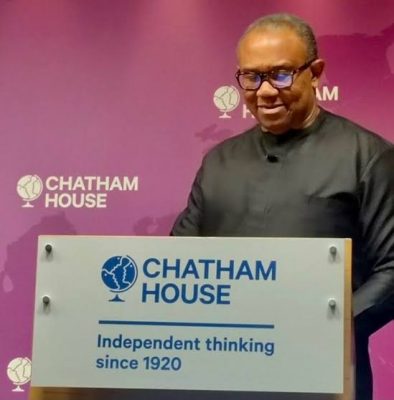 A group, Buhari Media Organization (BMO) has described Presidential candidate of the Labour Party (LP) Peter Obi’s comments on the economy and the nation’s debt profile, as a public display of ignorance of economic matters.

In a statement today, January 18, the group’s Chairman, Niyi Akinsiju and Secretary, Cassidy Madueke said that Peter Obi’s claim that all monies borrowed since 2015 were wasted, showed his tendency to play to the gallery with claims that have no basis in fact.

“It is shocking that a man who postures as one with an understanding of economics, with spurious statistics, would use the opportunity of a global stage to make an outlandish claim about the country’s debt stock under President Buhari.

“Yes, the Buhari administration has added to the debt he inherited in 2015, yet only the ignorant, or in some cases people with mischievous intentions, would carelessly say that all monies borrowed since 2015 were wasted.

“We wonder why Peter Obi was silent on PDP-era debt and what his former party used those monies for? That was an era where Nigeria’s public debt rose to $63bn with little or no infrastructure to show for it.

“But because of his penchant for grandstanding, a man who delights in quoting figures from far flung places to make unverifiable points, conveniently forgot that the Debt Management Office (DMO), the agency which manages the country’s debt, has a fact sheet on its website on what the Buhari era debt are used for.”

The group said that Peter Obi’s position on Nigeria’s debt in relation to that of other countries shows a lack of knowledge of economics.

“In one breath, the LP Presidential candidate said there was nothing wrong with borrowing and noted that more developed countries including US and Japan are owing 100 and 230% of their respective GDPs, yet in another breath, he sees a lot wrong with that of Nigeria which is owing less than 25% of its GDP because according to him, the other countries have ‘something to fall back on.’

“And for the records, most of the loans taken by the Buhari administration are not only tied directly to infrastructural projects including those abandoned by previous administrations, they also do not involve transfer of funds to Nigerian entities.

“The DMO website which Obi and his handlers did not even bother to check has a full list of ongoing road rehabilitation and construction works as well as rail projects and airport expansion being carried out with these loans. We urge them to take a proper look at what is there.

“When they do, they will find that what Obi described as nothing is what the agency termed as ‘projects that have the added benefits of job creation, not only by themselves, but through direct and indirect service providers, a number of which are Small and Medium Enterprises.’

“Let us add here that the same Peter Obi had been quoted on more than one occasion as saying that infrastructure cannot be used to stimulate economic growth, and then went on his usual trajectory of citing Bangladesh and Singapore as examples, when indeed it is widely accepted globally that investment in infrastructure is one of the most effective tools for achieving economic growth and development”.

The group urged Nigerians to continue to fact check Obi’s claims in order not to be misled by a smooth-talking average politician with no track record of performance in public office.