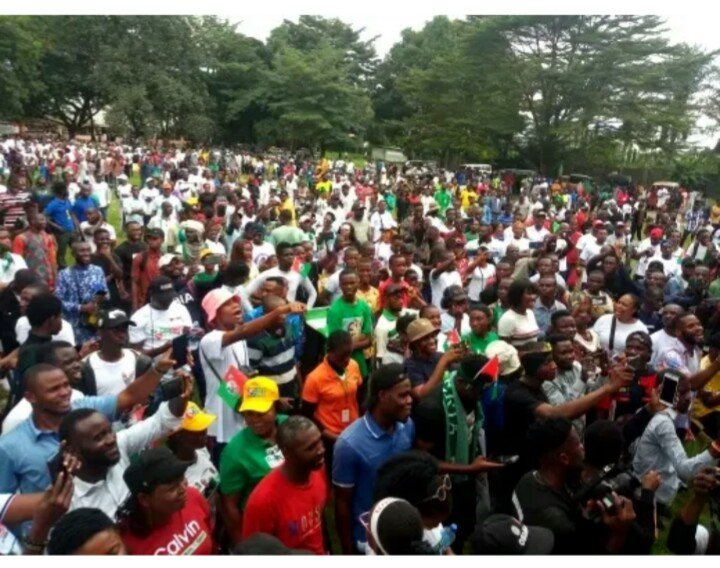 Former aide to ex-President Goodluck Jonathan, Reno Omokri has described large crowds at political rallies in various locations for the presidential candidate of the Labour Party (LP), Peter Obi, as show of force to disrupt the political space in the country.
Omokri, a staunch supporter of the presidential candidate of the Peoples Democratic Party (PDP), Atiku Abubakar, in reaction to the rallies held across the country by the supporters of Obi for the 2023 presidential election, acknowledged that the rallies are great achievements.
According to him, the Obidient movement should not be disregarded by anyone who is politically conscious, adding: ” the Obidient rallies at Festac and Amuwo were amazing. They are great achievements.
“Anyone who tries to belittle them is not politically astute. While Obi will not win in 2023, he has successfully disrupted politics in Nigeria. Well done Obi! Well done Obidients!”, he tweeted.
Omokri said that the rallies are just a show of force by southeastern traders who closed down their shops.
“These so called ‘one million man marches’ are mostly a gathering of traders in various Nigerian towns and cities, who close down their markets (that are heavily dominated by people of southeastern origin), to do what in the military is called “a show of force,” he tweeted.
Also reacting, the Spokesman for the All Progressives Congress APC) Presidential Campaign Council, and Minister of State for Labour and Employment, Festus Keyamo (SAN), said the rallying Obidients are not more than a thousand people who are not more than the electorate needed at two polling units.
“The aerial shots are the best. Now, look at this: at best the ‘crowd’ here is not more than a thousand people which is approximately just two polling units,” he quote-tweeted a video from one of the rallies.
Meanwhile, Obi’s supporters poured out into the streets across eight states of the country yesterday in what they called the beginning of five million man march.
The supporters poured out in their hundreds, occupying Lekki toll gate despite a court order barring the planners of the rally, led by the Labour Party and NCFront, from staging any rally at the Lekki tollgate.
The Lagos State Police Command followed this up with a statement barring anyone from marching at the Lekki tollgate.
The statement was signed by the spokesman of the Command, SP Benjamin Hundeyin.
So also was the request for the planners of the rally to use the National Stadium in Surulere not granted as at the time the rally began in the early hours of Saturday.
Prominent among those there is the Director General of the NCFront, Veteran Olawale Okunniyi.

The supporters of Obi and his running mate, Dr. Yusuf Datti-Ahmed, also poured out on the streets in Surulere and Ojuelegba axis of Lagos State; Warri in Delta State and other locations.