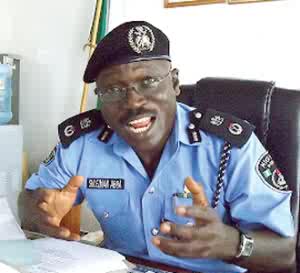 Suleiman Abba, until yesterday, the Assistant Inspector-General (AIG) in charge of Zone 7, Abuja, has emerged as the new Inspector-General of Police. He succeeds Mohammed Dikko Abubakar, who completed the maximum allowed 35 years of service yesterday.

Though no official statement has come from either the Presidency or the Police Headquarters, the outgoing Inspector General told newsmen in the Villa this evening that Abba is a competent officer to take over from him as “I go home to rest.”

When confronted, Abba declined comment as he crawled quietly into his car and drove off.

Abba was said to have been selected yesterday, in Abuja after a marathon meeting between President Goodluck Jonathan and the Police council, made up of the 36 state governors and the Chairman of the Police Service Commission, Mike Mbama Okiro (IGP, rtd).

It was gathered that the authority settled for AIG Abba following convincing arguments that the leadership of the nation’s security forces will be concentrated in a particular zone of the country should the new IG be appointed from the list of names earlier submitted to the President.

It was gathered that President Jonathan was also under pressure by the North, who insisted that appointing the next IGP from the South-South geopolitical zone would be counter-productive, especially with the security challenges facing the nation.

They were said to have argued that with the Chief of Army Staff, Lt General K. T. J. Minimah from South-South, Police Service Commission Chairman, Okiro from the South-South, an IGP from same zone would have been interpreted to mean deliberate ploy to use security forces to clamp down on the opposition expected from the North in the 2015 elections.

Five senior officers were said to have been considered as the new IGP and they include one Deputy Inspector General of Police from South-South, another DIG from North West, and three AIG’s, from North West, South –South and North Central zones. During debates at the meeting for a new police boss, a group argued that Abba’s appointment will amount to favouring a particular zone since he is from the zone as his predecessor as well as former IGP Hafiz Ringim. Another group, however, countered that during the administration of former President Olusegun Obasanjo, former IGP Tafa Balogun and the Chief of Air Staff then came from the same zone. Eventually, everybody agreed on the choice of AIG Suleiman Abba as the new IGP.

He was also ADC to Mrs. Abacha during the tenure of General Sani Abacha as military head state. The incumbent IGP Mohammed Dahiru Abubakar, whose tenure expires tomorrow, July 31, 2014, was appointed the 16th indigenous IGP in January 2012.

President Jonathan feels comfortable with the AIG zone 7, Suleiman Abba, having worked with him in Abuja for almost two years now.

Abba is an alumnus of the Nigerian Institute of Policy and Strategic Studies (NIPPS), Kuru, reports claim.