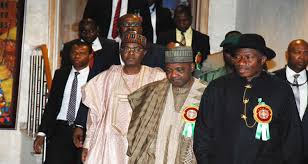 The meeting which started at about 12.10pm today, is still in session at the Presidential Villa, Abuja as at the time of publishing this report, at 5.30pm.

The National President, Christian Association of Nigeria, Pastor Ayo Oritsejafor and the Sultan of Sokoto, Sultan of Sokoto, Alhaji Sa’ad Abubakar III, who are in attendance, offered the opening prayers before the meeting commenced in a closed door.

Ministers in attendance included those of Interior, Defence, Police Affairs, Foreign, Agriculture, FCT and the Attorney-General of the Federation.