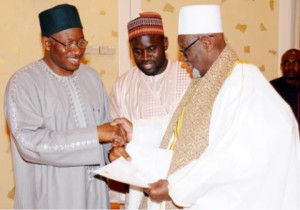 President Goodluck Jonathan has turned to Senegalese “Mallams” for special prayers and spiritual guidance over the unceasing spate of Boko Haram violent attacks and the return of female students of the Government Girls Secondary School, Chibok in Borno state abducted by Boko Haram on April 14.
The “Mallams were in the State House, Abuja today to offer the special prayers for the lasting solutions to the intractable carnage by Boko Haram. The President has been under increased pressure from local and foreign observers over the abduction of school girls in Chibok, Borno State as well as the increasing spate of killings perpetrated by the Boko Haram sect.
The group of clerics, numbering about 10, was led by Khalifah Sheikh Ahmad Tijani Inyass, the grandson of Late Shehu Tijani Ibrahim Inyass, the founder of the Tijjaniya sect.
Others in the group were Sheikh Muhammadul Makky Inyass, Sheikh Mansur Inyass, Sheikh Ahmad Tijjani Inyass, Sheikl Bashir Inyass, Inyass Mustapha Inyass, Abdullahi Muhammad Maigemu, Sheikh Ibrahim Dahiru Bauchi, Aliyu Ibrahim, Khalifah Shehu Nasiru Hamisu etc.
Also present at the special prayers were Vice President Mohammed Namadi Sambo, Chief of Staff to President, Brig- General Jones Arogbofa (rtd), Head of Service, Bukar Goni Aji; Ministers of the Federal Capital Territory, Bala Mohammed; Justice, Mohammed Bello Adoke; Sate for Health, Khaliru Alhassan; Women Affairs, Hajiya Zainab Maina; State for Agriculture, Asmau Mohammed, etc
The Mallams met the President for about an hours at the First Lady’s Conference Room where they offered the special prayers for an end to the security challenges facing Nigeria as well as peace and stability in the country.
The clerics had been in Nigeria originally to attend the Maulud celebration of Ibrahim Inyass in Gombe and received Presidential invitation to the villa for spiritual support.
Speaking to State House Correspondents after the meeting, spokesman for the group, Ahmed Tijani Sanni Alwalu said it was a historic meeting since former leaders, Yakubu Gowon and Late JTU Aguiyi- Ironsi had also invited the sect to pray for the country in the past.
“It is a historic visit because it has been done by his father with the then President, General Yakubu Gowon and General Aguyi Ironsi. So the history is repeating itself and we came for the Maulud of Ibrahim Inyass Gombe and on our way going home, the President requested for a courtesy visit and our Shehu granted it.
“We must come together, all Muslims and non- Muslims to achieve peaceful co- existence. We must pray so that we can all fight this insecurity in this country.
“The main purpose of coming here is part of the prayers for peace in this country.”