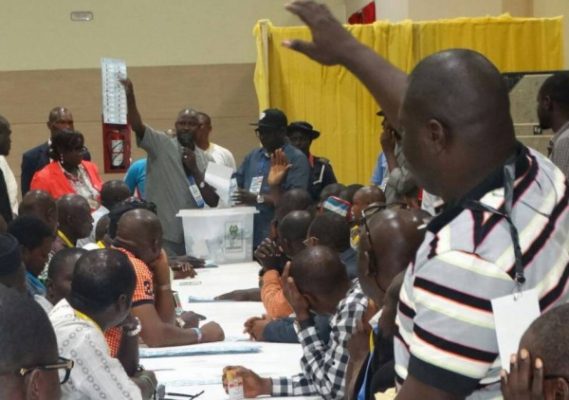 A foreign observer group, the West Africa Network for Peace-building (WANEP) has recommended regular updates on the collation process in the just concluded Presidential electon across Nigeria as a way of assuring the public of the transparency of the process.

Giving a Situation Room report today, Saturday shortly after the end of the voting, WANEP noted the commencement of voting on time in most polling stations across the country.

In the report, read by co-chair , Ms. Aisha Ado Abdullahi WANEP said however, that there were reported late opening of polls in several stations due to late arrival of polling officials and materials, saying that in some cases, as at 10:00 am, materials were yet to be distributed to areas such as Gwagwalada Area Council of FCT and Mashi LGA of Katsina State.

“In an isolated case, the absence of security personnel at Shehu Manzo ward of Gombe LGA, Gombe State resulted in delay of the commencement of polls.

“Card readers were not functioning appropriately in some stations visited for example, in Ward 4, PU 002 at St. Jonathan in Ondo State; and also Yardole Kasuwa area of Kebbi State, but the technicians addressed the situation. Concerns abound over the disenfranchisement of eligible voters due to technical issues experienced with the use of card readers.

“Observers noted the inducement of voters in Kumbotso LGA of Kano State and Konshisha LGA of Benue State, where voters were reportedly seen receiving money from party stalwarts to vote their preferred candidates.

“Despite the late commencement of polls in affected areas, voters reportedly conducted themselves peacefully and orderly, except in a few cases where isolated violent incidents occurred.”

On the voting Process, WANEP noted moderate voter turnout in polling stations visited. They also observed orderliness and the compliance with voting procedures by polling officials in most polling stations.

“Observers reported at least 31 major incidents including the following:

In Borno and Yobe states, armed attacks and explosions were reported in some locations.

In Lagos State, observers reported the intimidation of voters at several polling stations in Okota, Aguda, Alimosho and Oshodi/Isolo LGA; as well as burning of ballot boxes in ward 018 in Ago Palace Way and 023 Baba Ewe area in Okota LGA. Ballot boxes were reportedly snatched by suspected political thugs, who chased voters away in PU 036 of Obisanya street, Mafoluku, Oshodi LGA. People of a certain ethnic group were reportedly turned away from voting in a polling station in Banwo Street, Aguda area of Surulere; those who were allowed to vote were followed to the polling booth to see whom they voted for.

See also:  PDP Wanted Me To Be Insulting Buhari, It’s Not In My Character – Ebonyi Gov, Umahi

“In Kogi State, a 19-year old boy was killed at PU 006 Ajetachi in Ayangba Kogi State over refusal to vote for a party. Ballot boxes were burnt in Okesi ward of Ogori/Magongo LGA.

“In Rivers State, election materials were seized at Wards 4 and 12 of Ikwerre LGA amid heavy shooting. The former Chairman of PDP in Rivers State was shot dead by unidentified gunmen in Andoni LGA. Electoral materials were also hijacked for 14 out of 16 wards at Gokana LGA.

“In Zamfara State, election materials were reportedly destroyed in PU 004 of Madawaki ward, a situation that disrupted the voting process. In response, the police fired sporadic gunshots to disperse suspected thugs and moved the election materials to the central police station.

“In Delta State, PU 005 of ward 2 was moved to a secondary school. The gates of the school were locked, preventing observers and voters from gaining entry to the premises. However, members of a particular political party were allegedly allowed entry.

“WANEP recognizes and appreciates the diverse interventions undertaken by key stakeholders especially INEC to resolve lapses in the voting process as well as deployment of security officials to contain violent incidents and restore normalcy in affected areas. However, in view of the delayed arrival of materials in some polling stations as well as increasing reported violence, there is need for concerted and reinforced effort to ensure the prevention and mitigation of violence during the counting and collation processes as well as in the aftermath of the announcement of results. In this regard, WANEP makes the following recommendations to ensure the promotion of peace and stability in the remaining process:

“INEC should regularly provide updates on the collation process to assure the public of the transparency of the process.

“WANEP condemns violence reported and calls on security agencies to reinforce security in affected areas but also in other areas to prevent and mitigate potential violence that may arise.

“Security agencies should maintain utmost professionalism in the discharge of their duties and assure the electorate of their commitment to maintaining law and order throughout the process.

“WANEP calls on the Security agencies to investigate reported incidents of explosions on election day as it is critical for developing contingency plans for future elections.

“Candidates and Political parties should abide by the Peace Accord and refrain from inflammatory statements or publication of results and all acts that are capable of instigating violence as we await the official announcement of results by INEC.”