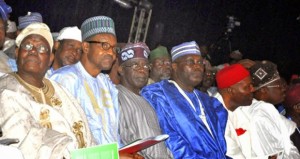 The Nigeria’s main opposition, All Progressives Congress (APC) is set to hold its first national convention tomorrow, Saturday, even as police have swung into action tightening security around Eagle Squire in Abuja which is the venue of the convention.
Scores of policemen including the anti-bomb squad, riot policemen, and the dog unit have been deployed in and around the venue of the convention to provide protection for the thousands of party faithful and delegates participating in the event.
Policemen and officers of the Federal Road Safety Corps used heavy duty trucks to block off part of Shehu Shagari Way as well as other junctions along the road, causing a serious traffic snarl.
Scores of vehicles that brought the party faithful were parked on the kerbs and at every available space thus making the area rowdy.
Thousands of APC members had been streaming in to the FCT since Thursday evening while those from nearby states came in on Friday in buses and private cars.
Posters of candidates for various elective positions were pasted on the vehicles with each of them highlighting their strengths and how they would work for the progress of the party, if elected.
Abubakar Audu, who claimed to be a party member from Zamfara State, said he arrived in Abuja late on Thursday night, adding that he was forced to sleep in the bus that brought him and other members for the convention.
It was gathered that access to the convention venue would be tightly controlled to prevent unaccredited persons from entering the grounds to cause confusion.
The FCT Police Public Relations Officer, Altine Daniel, said the command had deployed enough  policemen to ensure a hitch-free event, assuring that the police had secured the convention grounds and other strategic areas in the Federal Capital Territory.
“You can see our men everywhere; we have deployed enough officers and men to ensure a hitch-free convention, so the delegates, party faithful and Nigerians are assured of a crisis-free programme.” [myad]