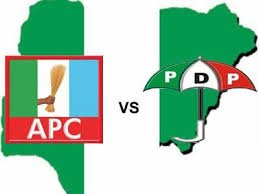 Losers in the Saturday, March 23 supplementary governorship elections are protesting the results, threatening to challenge the results at the election tribunals.

The Sokoto State Chapter of All Progressives Congress (APC) was first to reject the declaration of Governor Aminu Tambuwal of the Peoples Democratic Party (PDP) as winner of the election in the state.

Speaking to news men in Sokoto today, Sunday, the APC’s spokesman, Bello Danchadi, alleged that the election process was flawed with irregularities, which he said were duly reported to electoral body.

Danchadi said that the margin of 342 votes was far less than the registered voters in polling units where elections were not held, a development which he said contravened the electoral law.

He said that the party had also registered its complaints to INEC, which included alleged outright rigging perpetrated by the PDP.

He alleged that some eligible voters at some polling centres were denied voting, and in some places repeated votings were recorded.

“We draw the attention of INEC to a number of polling units that were canceled as result of violent attacks by thugs, while others were arbitrarily canceled to please certain political party interests.

“In view of these we deem it necessary to express our disagreement with the action taken by INEC to declare a winner without giving us a fair hearing in our position in the electoral processes.”

In Benue, the APC also rejected the outcome of the governorship election, saying that the results did not reflect the wishes of the people.

Ina statement by the Secretary of the Jime/Ode Campaign Organization, Eugene Aliegba, the party said that it would challenge the results in court.

The statement insisted that the outcome of the poll was “totally unacceptable to the APC”.

And senator Jeremiah Useni, gubernatorial candidate of the Peoples Democratic Party (PDP) in Plateau has vowed to challenge the re-election of Governor Simon Lalong for another term. Useni said that he and his team had gone through both the official results released by INEC and the documents submitted by the party’s field staff and had reservations.

“We have every reason to believe that justice has not been done to our people in this election because there was massive rigging and electoral shortcomings. Sokoto re-run: INEC halts results collation over 1 LGA “After due consultation, I hereby state that the results announced by INEC is not acceptable to us.

“Consequently, we have requested our legal team to activate all the due processes to reclaim our cherished mandate.

“I give you my word that we will pursue this matter diligently, and by the grace of God, we will overturn and recover the people’s mandate.”