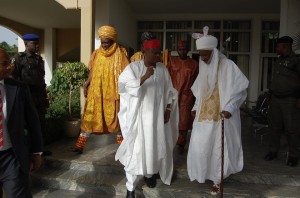 The Kano state governor, Rabiu Musa Kwakwaso has presented a letter formally confirming the appointment of the former governor of the Central Bank of Nigeria (CBN), Mallam Sanusi Lamido Sanusi as the new Emir of Kano even as the governor made it clear that Sanusi Lamido was one of the names submitted to Government for consideration.
The presentation at the Government House Kano today was attended by top government officials, stalwarts of All Progressive Party, opinion leaders, and business moguls in the city.
Governor Kwankwaso said that the new Emir’s wealth of experience and his deep rooted connection with the ruling House gave him an edge over the other contenders for the exalted seat.
Kwankwaso dismissed insinuations that the new Emir’s appointment was influenced by political leanings, stressing that “the new emir was appointed on merit”
He emphasized that Sanusi Lamido was never smuggled into the list contrary to insinuations in some quarters.
“I must clarify that the six contenders to the throne are good friends and it remains a statement of fact that only one would emerge.”