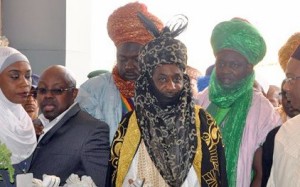 Suspended Governor of the Central Bank of Nigeria (CBN), Sanusi Lamido Sanusi is likely to emerge as the next Emir of Kano, with the demise, yesterday, of Alhaji Dr. Ado Abdullahi Bayero, after about 41 years on the throne.

Sanusi Lamido Sanusi, who has been eying the over 1000 year old stool which his late father mounted before he died, has been Dan Majen Kano, a senior emirate position in the Kano emirate.

Information has it that no fewer than 30 candidates, including Sanusi Lamido are in hot contention for the stool. Others are the Ciroman Kano (heir apparent), Sanusi Lamido Ado Bayero; Turakin Kano, Nasir Ado Bayero; Sarkin Dawaki Tsakarigida, Aminu Ado Bayero; Wambai Kano, Alhaji Abbass Sanusi; Galadima Kano, Tijjani Hashim; and a member of the board of the Independent Corrupt Practices and Other Related Offences Commission, Abdullahi Ado Bayero.

Investigation revealed that all the candidates are expected to be screened soon by a four-man team of kingmakers in the Emirate’s Council of State.

A top source said: “The race for the vacant stool  started immediately the death of Emir Ado Bayero was announced. We are talking of about 30 candidates.

“The late Emir had up to 70 children, including females. The jostle appears to be a straightforward battle between the Bayeros and Sanusis whose fathers were brothers.”

The source added that although the Emir appointed his son as Ciroman Kano (heir apparent), but that it may not translate into automatic succession.

The fate of the candidates, the source said, lies with the kingmakers, who will make recommendation to the Kano State Government.

“The Emirate seeks a ruler who will consolidate on the unprecedented developments recorded during the reign of Ado Bayero.

“So, beyond being versed in the history and tradition of Kano Emirate, the new Emir is expected to be highly educated, morally upright, cool-headed, well-connected and with a tinge of international influence and a symbol of peace.

“This is why it is likely to be a battle royale between ex-CBN Governor and the children of the late Emir. Sanusi Lamido Sanusi has intimidating credentials.

“For the first time, the kingmakers have blue-blooded candidates who are exposed and well-educated abroad.”

It was gathered that those aspiring to the stool had been lobbying influential Kano leaders to prevail on the kingmakers to pick them for the vacant stool. There are indications that the candidates are already playing what the people say “royal politics.”

For instance, some are claiming that one of the candidates has a Yoruba maternal lineage and the Fulani heritage should not be handed to a Yoruba man.

They are believed to be digging up their antecedents to outwit each other before the kingmakers who have to consult within a short time to appoint a new Emir. [myad]