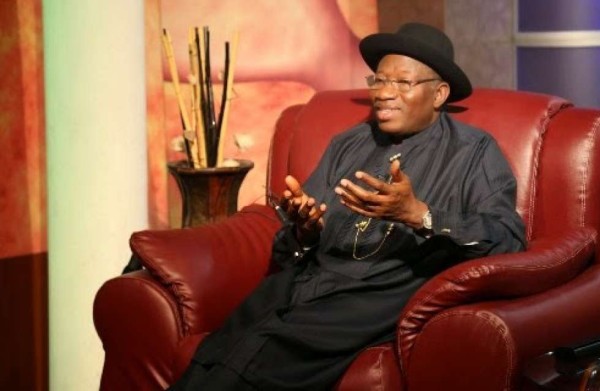 President Goodluck Jonathan has expressed confidence that over 200 female students who were kidnapped by Boko Haram from the Government Girls Secondary School in Chibok village, Borno state on April 14 last year are still alive.
The President, who featured in live interview of the African Independent Television (AIT) today, said that he hope that the girls are still alive stemmed from the fact that if they have been killed, Boko Haram leader, Shekau would have released video footage on it.
He said therefore, that there is high hope that the girls would be rescued eventually, but was not specific how.

The schoolgirls have spent more than 300 days in captivity since they were abducted in April 14 last year during their West African Examination Council final papers.

The President’s claim that the girls were still being kept by Boko Haram contradicted Abubakar Shekau’s statement in a video released in October 2014 to the media that he had married off the pupils. In a previous statement, the group’s leader had threatened to sell the girls as slave brides.

Jonathan argued that if the schoolgirls had been killed, the Boko Haram insurgents’ commander, Shekau, would have released a video showing how they the girls were murdered.

According to the President, the Nigerian security forces are also wary of storming the main stronghold of the terrorists because they fear the insurgents may use the girls as shields.

“Because they may use them as shields so we are working with the global best practices. We can’t just move in with artillery and clear the place. The good story is that they’ve not been killed. They are still alive because when terrorists kill they display.”

The President however contradicted his assertion, during his Monday interview with the cable TV news channel, Al Jazeera that the Federal Government did not mishandle the Boko Haram insurgency, claiming that the insecurity problem did not start during his tenure.

Jonathan said: “At the beginning, we did not really estimate the capacity of Boko Haram. But over the years they continued to build their capacity with links with other terrorist groups. I believe we’ve got up to 65 per cent of what is needed to prosecute this war.”

He added that the military force was winning the war against the insurgents, noting that only Madagali still remains under the control of the terrorist group in Adamawa State.

Speaking on the alleged plot by the Peoples Democratic Party and his administration to foist an interim government on the nation, Jonathan pointed out that there was no provision for interim government in the country’s Constitution.

Although Jonathan expressed confidence that he was going to win the March 28 election under the platform of the PDP, he admitted that his chances were slimmer than they were in 2011.

“Globally, a sitting president wins with fewer votes than during his first attempt. PDP still has better chances of winning a national election. PDP is still the dominant party; there’s no polling unit where you don’t have PDP members.

“If you remove the PDP elements in the opposition, it would just collapse like a pack of cards. PDP still has an edge over every other party; I am not worried about the outcome of the presidential election,” the President said. [myad]