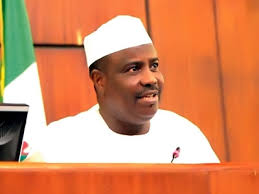 Nigeria soldiers, this morning in Kaduna, stopped the motorcade of the Speaker of the House of Representatives,  Aminu Waziri Tambuwal, and searched his official car. He was in the flagged car on his way to the venue of an international conference on security.

Sources said that the soldiers asked him to wind down his window glass to the surprise of other VIPs, who drove past the same route.

It was learnt that the security details attached to Tambuwal protested but the soldiers stood their ground, announcing that they were acting on “orders from above.”

The attitude of the soldiers was said to have angered Tambuwal who stormed out of the car and trekked to the venue, a few metres away.

While Tambuwal’s car was searched, other VIPs, including governors, who attended the conference were allowed into the hotel without hindrance.

A source, who witnessed the drama, said, “The convoy was driving to Hotel 17, the venue of the conference. The soldiers sighted the speaker’s convey and picked out his car, insisting that it must be searched.

“They asked him to wind down his window glass. The speaker was shocked that even after recognising him, the soldiers still said they wanted to search his official car.”

The incident occurred at the entrance to Hotel 17, Kaduna, venue of an International Conference on Security and Development Challenges of Pastoralism in West and Central Africa, organized by the office of the National Security Adviser.

The theme of the conference was: “The Role of Pastoralists in Preventing Insurgency and Conflicts for Sustainable Peace and National Security.”

Tambuwal, who arrived at the venue of the conference at exactly 9.16am for the 10 am opening ceremony, had his convoy stopped by soldiers who insisted they must search his official car before he could be allowed in.

The speaker’s Special Adviser on Media and Public Affairs, Mr. Imam Imam, confirmed the incident and said that since the event was scheduled to start at 10am, his boss arrived at 9.16am only to “face embarrassment in the hands of the soldiers.”

He wondered why it was only Tambuwal’s car that was picked for the search among the many VIPs, including governors, who came for the event.

“What they are doing is undermining the legislature as a whole. It is not about the speaker but the institution.

It was gathered that Tambuwal later delivered his speech at the event and left for Ibadan in Oyo State. [myad]