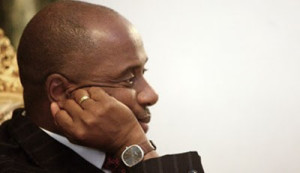 Soldiers who claimed to be acting on the order from ‘above’ have held the Rivers State Governor, Rotimi Amaechi hostage in Odudu, Ondo State. The governor was on his way to Ekiti State today for Governor Kayode Fayemi’s re-election rally but was said to have been prevented from leaving and exiting Akure, the Ondo State capital.

The Rivers State Government, which condemned the development, disclosed that Amaechi was ambushed and held hostage by soldiers and other Federal Government security agencies.

State Commissioner for Information and Communications, Mrs. Ibim Semenitari, told newsmen in Port Harcourt todayy that the governor was denied entry into Ekiti by soldiers led by a captain, who insisted got the orders from above.

Mrs. Semenitari expressed worry about the safety of the governor, adding that while Amaechi charttered aircraft has been grounded, top government officials like the Ministers of Defence and Police Affairs had landed at the same Akure Airport.

It will be recalled that a similar incident took place at the Mallam Aminu Kano International Airport where Amaechi was locked inside the airport for an undisclosed number of minutes.

“The Rivers State Government is concerned about the safety of Governor Amaechi who is right now being held hostage commando style by soldiers and federal government security agents in Odudu, Ondo state.

“Governor Amaechi as Chairman of the Nigeria Governors’ forum and as an APC governor and chieftain had left Port Harcourt this morning for Ekiti State where he was to join his brother governor in his last mega rally before the elections.

“Governor Amaechi was ambushed and refused entry into Ekiti by military personnel acting on orders from above. He made to turn back and return to Akure where his chattered aircraft was parked but was chased and rounded by armed soldiers and security personnel in Odudu, Ondo State.

“In the meantime, the chattered aircraft that conveyed the governor has been grounded while the ministers of Defence, police Affairs and Minister of state for Defence have landed in the Akure airport,” Semenitari said in a statement issued in Port Harcourt.

Mrs. Semenitari explained that, the state government was particularly worried that the Federal Government had singled out Amaechi for harassment and attack, even as she recalled that the incident in Ondo State was coming on the heels of a similar occurrence in Kano State.

The commissioner also decried the move by six members of the State House of Assembly to carry out an illegal impeachment of the state governor at Krisdera Hotel and later on Bauchi Street in Port Harcourt.

“Ordinarily such banality should be ignored as it is neither legal nor constitutional. However in the light of the recent attempts to hoist a Chief Judge on Rivers people through the back door and the attendant rumours that the reason for that desperate act was to make it easier for the PDP to actualize its sinister daydream of ousting Governor Amaechi before May 29, 2015, we believe that it has become necessary to draw the attention of Rivers people, Nigerians and the international community to the situation in Rivers State.

“Only yesterday, in preparation for this tragicomedy, the Rivers State chapter of the Peoples Democratic Party accused Governor Amaechi of importing terrorists into the state and the region. They continued their diatribe by demanding that the governor of Rivers State be put under surveillance.

“The State Government wouldn’t have dignified the PDP’s display of ignorance with a response but for the fact that these accusations coupled with today’s actions are ominous signs of how far the PDP is willing to go in its quest to cling onto power by all means.

“The antecedents of impunity on the part of the leadership of the PDP are instructive and the party’s desperation to harm and stop anyone they perceive as major threat to their crumpling electoral fortunes next year is no longer news. The detention attempt and incident at the Kano International Airport last week are still fresh in the minds of Nigerians.

“Also, the call to put Governor Amaechi under surveillance (or is it house arrest?) on the same day that PDP started effort to unseat the Governor of Adamawa State, His Excellency, Murtala Nyako, is enough indication of the script already written by a jittery PDP.” [myad]