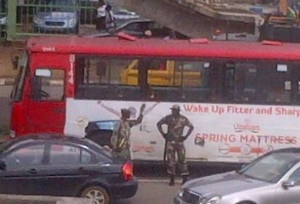 Nigerian soldiers have been on rampage since morning today, blocking roads, firing shots into the air and burning several buses in Lagos following the death of a soldier in a bus accident.

The mayhem unleashed on Lagos since morning has been likened by some Lagos residents to the country’s former military dictatorship.

Publisher of children books, Bunmi Ajayi who shut the doors of his office as the shootings were going on said: “they (soldiers) were armed to the teeth. We are all afraid. Everybody was afraid of stray bullets because the soldiers were shooting sporadically (in the air) to scare away people.”

Another witness, Segun Alabi, said soldiers were preventing buses from passing through and confiscating and destroying people’s smartphones to prevent witnesses filming them.

The Director General of the National Emergency Management Agency (NEMA) for Lagos state, Femi Oke-Osanyitolu said: “the rampaging soldiers have already burnt five … buses, referring to the incidence as “barbaric and uncivilized.”

The soldiers, he said, were reacting to the killing of one of their number who was hit by a bus while riding a motorcycle.

The governor of the state, Babatunde Raji Fashola, is said to be currently talking with the superior officers of the army to restore order within the area, around Ikorodu Road, on the sprawling Lagos mainland, Oke-Osanyitoluhe said.

The defence spokesman did not immediately comment on the soldiers’ behaviour. Disturbances continued for several hours from the morning into the afternoon.

Local TV stations broadcast pictures of the buses up in flames. Twitter buzzed with comments from Lagos residents comparing it to the days of military dictatorship in the 1970s and 80s.

Rights groups have noted since the return of democracy the abuses and indiscipline which have remained the problem of the soldiers, especially in the remote northeast, where Boko Haram is threatening the stability of the country. [myad]