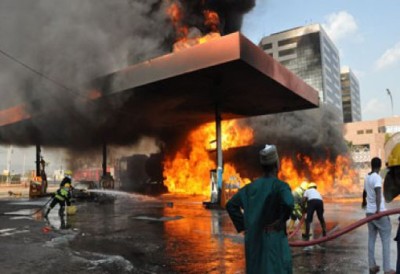 Kano, the capital city of Kano state has been in the news since last week as members of Boko Haram pound it with bomb blasts, the latest of which is the one that occurred today at the NNPC Mega Station in Hotoro Quarters, along Maiduguri Road.

Only yesterday, bomb explosions rocked three different parts of the state capital, the most devastating being the one that killed at least five people and injured eight others at the Catholic Church in the Sabon Gari area of town. The same yesterday, a female suicide bomber met her death while attempting to blow up the campus of the Bayero University.

The blast today was reported to have killed four people including the suicide bomber. Eight others that were buying kerosine were injured in the blast, but the station was spared from burning.

The female bomber had reportedly slipped into the crowd of residents buying kerosene at the station before detonating the explosives.

The Police confirmed the death of the suicide bomber and three others, noting that the eight persons that were injured had been rushed to the hospital.

A statement on the police website, said that the NNPC station was not set ablaze “due to the security barricade put in place by the Policemen on duty at the station,” adding that this would have complicated the emergency response.

“Citizens are advised to stay off the scene, be vigilant and report any suspicious person(s) or activities to security forces. Full scale investigation has commenced, intensive patrol of the city is ongoing,” the statement by Force Public Relations Officer, Frank Mba, said.

The blast at St. Charles Catholic church, Kano, on Sunday was caused by also caused by a female suicide bomber.
The Police said it had arrested five male suspects for their complicity in the bomb attacks on the church and other places in the city.

Three of the suspects were picked up for their involvement in the attack on the church while the two others, were were arrested in connection with the foiled bomb attack at Isyaku Rabiu Mosque in Kano. [myad]