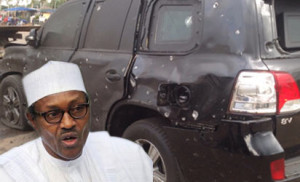 President Goodluck Jonathan has thanked God for sparing the lives of former Head of state, General Buhari and a prominent Islamic scholar, Sheikh Dahiru Bauchi after the twin bomb blasts in Kaduna, targeting the two personalities.
In a statement by his special adviser on media and publicity, Dr. Reuben Abati, the President expressed utter surprise that the bombers targeted General Buhari and Sheikh Dahiru Bauchi, adding that targeting of the prominent political and religious leaders by terrorists and enemies of the nation is an odious attempt to inflame passions and exacerbate disquiet, fear, insecurity and sectional divisions in the country.
President Jonathan denounces what he called “the dastardly act” even as he assured residents of Kaduna and all other Nigerians that his government will continue, and will further intensify its ongoing efforts to effectively curb the menace of terrorism in the country.
He has specifically directed the Police and other national security agencies to take all necessary actions to apprehend the perpetrators of the Wednesday’s attacks on Kaduna and urged all residents of the city to give them the fullest possible cooperation and support as they work to bring the terrorists to justice.
The President sent his condolences to the families of those who were sadly killed by the bomb blasts even as he sympathized with all those who were injured in the twin bombings “in this Holy Month of Ramadan, which defy the tenets of Islam, and provide further proof that the terrorists are nothing but blood-thirsty extremists bent on undermining the unity and progress of the nation.”
While General Buhari escaped unhurt in the bomb explosion around Kawo market as he headed towards his country home in Daura, three of his security aides were said to have injured and were rushed to hospital.
A close aide of the General said that the bomber, who drove in a Toyota Sienna vehicle, rammed into the general’s convoy and detonated the explosive-laden vehicle.
He said the opposition leader survived the attack, but his vehicle, a Toyota Land Cruiser, and another one behind it were badly damaged.
“The General survived and he was evacuated from the scene of the bomb blast in a Golf Volkswagen vehicle‎,” he said.
He also said that General Buhari’s damaged vehicle was towed away by emergency workers.
The spokesperson of General Buhari’s All Progressive Congress, [APC], Lai Mohammed, said the explosion was targeted at the former head of state.
“Yes, his convoy was attacked. He narrowly escaped but some of his aides were hurt. The General is ok, but perhaps traumatized.”
A loyalist of General Buhari, Rotimi Fashakin, said the former head of state was on his way to his home town–Daura in neighbouring Katsina state–when he was trailed by the bomber and was attacked.
“I’m sure political Boko Haram are behind the attack,” Mr. Fashakin said, adding: “General Buhari was the target of the attack.”
The leader of a pro-Buhari pressure group, The Buhari Vanguard, Jasper Azuatalam, said the former Nigerian leader was possibly attacked over his recent criticism of President Goodluck Jonathan.
“Recall that two days ago, General Muhammadu Buhari issued a statement warning President Jonathan and his government on their attempt to muscle the opposition and endanger Nigeria. The Presidency raised an eyebrow to the statement.”
Meanwhile, the state Governor, Muktar Yero has announced a 24 hour curfew in Kaduna metropolis. [myad]