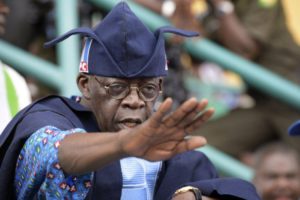 “I, Asiwaju will remain true to the progressive ideals that fuelled the creation of APC. In our journey to national betterment, plans and policies will be made, then amended. Mistakes will occur and then corrected.”

These were the avowal declarations of the National Leader of the All Progressives Congress, APC, Bola Tinubu, on his twitter handle @AsiwajuTinubu.

Asiwaju Tinubu wrote further: “APC, is for the people and the national purpose is bigger and more important than any individual desire.

“I have devoted my political life to achieve what has been achieved. My heart is too much of the people and my mind too fixed on establishing.´

His declared commitment to the APC came against the background of the recent media reports that he and former Vice President, Atiku Abubakar were planning to float another political party ahead of 2019 general elections.

Asiwaju, who governed Lagos state for two terms, was seen as not being happy happy with the leadership of APC, when he openly asked the National Chairman of the party, Chief John Odigie-Oyegun to resign his position over alleged irregularities during the party’s primary election in Ondo State that produced the State governor-elect, Rotimi Akeredolu. [myad]