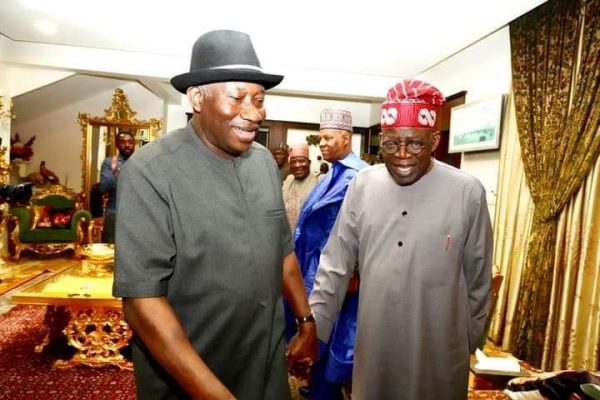 Former Minister of Aviation, Femi Fani-Kayode, has described the recent visit to the former Nigeria’s President, Dr. Goodluck Jonathan by the presidential candidate of the All Progressives Congress (APC), Asiwaju Bola Tinubu as a show of maturity and decency

In a post today, August 31 via his verified Facebook page, Fani-Kayode commended Tinubu and Shettima for being mature and decent to visit Jonathan in order to pay their respects and brief him about their efforts and plans to lead the country in 2023.

The former minister also commended Jonathan for receiving Tinubu and Shettima with “respect and joy,” describing the former President as one of the most civilized, compassionate, capable and humane leaders that the country has ever known.

He said: “I am delighted that Asiwaju Bola Ahmed Tinubu and Sen. Kashim Shettima, the flagbearers of our great party the APC for next year’s presidential election and our incoming President and Vice President respectively, had the presence of mind, maturity, decency and humility to honour him with a visit yesterday in order to brief him about their efforts and plans for our collective future as a nation and to pay their respects.”

“I am also moved and touched by the fact that, despite all the differences and challenges of the past, President Jonathan received them so warmly and with such respect and joy.

“This is a clear case of politics without bitterness and it portends great things for the future of our country.
“What BAT and GEJ did yesterday was to prove to the world that they both have class and show what true leadership is all about.

“I thank God for their exemplary behaviour, inspiring leadership and respective lives.”

Tinubu and his running mate, Kashim Shettima and five APC Governors had paid Jonathan a visit at his Abuja residence yesterday, August 30.

The former Lagos governor’s visit to Jonathan might not be unconnected to his presidential ambition in 2023.