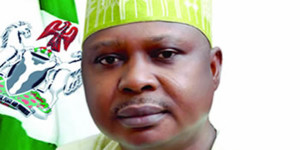 Confusion seems to have crept into the way forward regarding the female students of the Government Girls Secondary School, Chibok in Borno state, who were abducted on April 14 by members of the deadly Boko Haram.
While the special duties minister, Tanimu Turaki said that the government is ready to talk with members of Boko Haram on the terms for the release of the abducted girls, the senate President, David Mark has ruled out the possibility of such negotiation.
Boko Haram leader, Abubakar Shekau had said on Monday that the captured girls who have been converted to Islam can be swapped for jailed fighters.
The special duties Minister, who is also the chairman of the Presidential committee on possible negotiation with Boko Haram said that if Shekau is sincere, he should send representatives for talks.
He said that Shekau should send people he trusts to meet the standing committee on reconciliation which he heads, even as Senator Mark said in far away Beijing, China today: “the federal government would never negotiate with terrorists of which Shekau is one, under whatever circumstance.”
According to Mark, negotiating with terrorists will not serve any good purpose but would further give them room to wreak more havoc on both the country and its people.
He noted that the insurgents would not respect any terms of agreement that may be entered into with them because there has been no platform of trust whatsoever.
“Nigeria will not negotiate with the terrorists under any circumstance because you don’t negotiate with criminals which Boko Haram insurgents are.
“We are going to bring the girls back safe and sound for their parents without any negotiation with Boko Haram as every effort towards that, which cannot be disclosed in the public is being made to rescue them.”