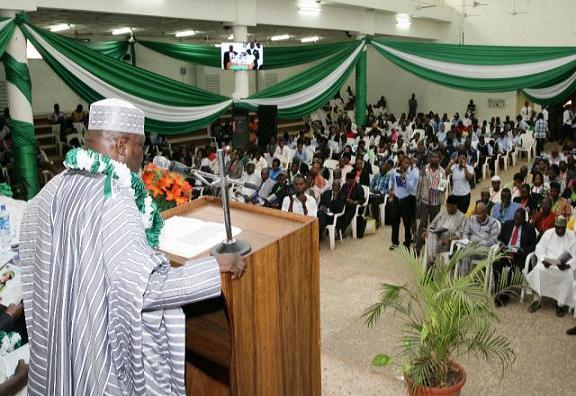 Former Vice President Atiku Abubakar has said that the current federal structure in Nigeria, which he termed unitary federalism, has been a creation by, and for the military governments of the past.
“As more power was concentrated in the centre, the federal government appropriated more resources and expanded its responsibilities. All of these were done in the name of promoting national unity. And the process was relatively easy as the unified command structure of the military ensured little opposition.”
In a speech delivered at the Nasarawa State University, Keffi today, the former Vice President made it clear that fixing Nigeria will require reversing decades of over-centralization of power and over-concentration of resources at the centre.
According to him, whereas the purpose of the unified federal structure was to foster national unity, “the notion that over-centralization and an excessively powerful centre is equivalent to national unity is false and had indeed, made our unity more fragile and our government more unstable.”
Atiku suggested the re-negotiation of Nigeria’s union in order to make it stronger by granting greater autonomy, power and resources to states and local authorities. These tiers of government, he said, will ultimately unleash the people’s creative energies and spur more development.
The chieftain of All Progressives Congress (APC) said that the structure of government should be a major focus of delegates at the on-going National Conference, adding that the current federal structure arrogates too much functions and resources to the government at the centre, and thus killing the spirit of innovation and enterprise among the people. These, he said, are a critical component in building a self-sustaining economy.
Atiku reversed his initial stance on the constitution of the national conference, saying that he wanted delegates at the conference to make the best use of the opportunity, adding: “I want to assume that a new and improved Nigeria is the goal, and I believe that any opportunity for people to talk is better than to fight.
“The National Conference should focus on designing a political and governmental system that empowers local authorities and gives them greater autonomy to address peculiar local issues, and enhances accountability, while contributing to the general good of the country.”
He said the envisaged robust federal system would reduce the tensions that are built into the nation’s current over-centralized system.
Atiku would not buy the notion that the top-heavy federal arrangement as is currently being operated is working to the favours of a section of the country.