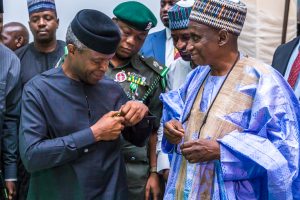 Vice President Yemi Osinbajo, has commenced what his spokesman, Laolu Akande described as an unusual approach to campaigns, by adopting a door-to-door strategy in two Abuja suburbs of Karu and Nyanya.
in a statement, Akande said that the Vice President today, Tuesday, visited two homes: Alhaji S.K Ahmed’s family in Nyanya and the Jimiko compound in Karu.
According to the spokesman, no sooner Professor Osinbajo arrived in the communities than the people thronged out en-masse in both places, chanting praises of the President and singing party songs.
He said that after meeting both families, the Vice President addressed the crowd and spent time interacting with the people who thronged out in their numbers, often fascinated to see him unannounced in their neigbourhoods.
He quoted the Vice President as saying: “for the honest, decent and hardworking Nigerians, Mr. President has devoted his life to ensuring that their lives are made better even when it is sometimes not easy to do so.
“All of us are going higher. I want you to believe that President Muhammadu Buhari is going to do even better. We have to create more jobs for all these young people. We have to give our market women credit so that they can do more business; our young people money so that they can do more business.”
Speaking on the President’s concern for the common man, Professor Osinbajo said: “when he ask us to start the Trader Moni, he said, this is one way by which we can help people to start doing their own business.”
He said that Nigeria’s future is brighter with President Buhari on the saddle, adding that no public funds would be stolen under his watch.
“So, I am here to say to you that the future of our country is great. All of you that are here, you are going to see a better Nigeria and that greater Nigeria can only come if the government is honest; If the government is not stealing our money.
“If the government is honest, it will build all the roads in Nigeria, for instance, like we are doing the Lagos-Kano rail and others, now.  You can see that with little money we are doing much more because we will not agree to the stealing of our resources.
“We will go forward and we will move forward. It is a bit difficult now because we are building the foundation. When we came into office; We found no savings. Oil which was our biggest earnings, we had earned so much in four years but there was little to show for it.  They didn’t build the railway, no roads. So, when we came we decided to first of all do the right thing.”