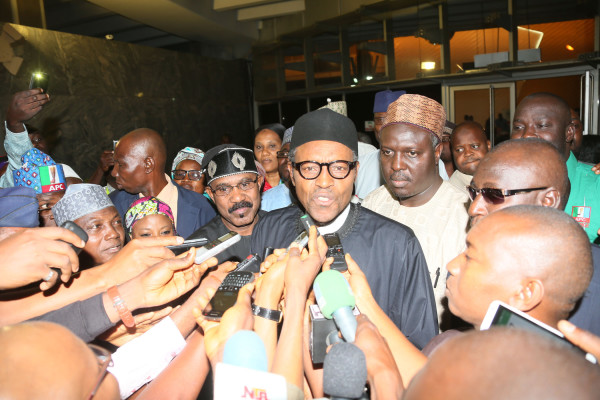 President Muhammadu Buhari has bemoaned the kind of Nigeria he inherited from the government of Dr. Goodluck Jonathan, describing the situation Nigeria faced up to May 29 as ‘disgraceful.’

The President, who had a meeting with members of the State House Press Corps, comprising senior journalists and editors covering the activities of the presidency, said that a nation that fails to pay its workers should cover its face in shame.

“At least, workers should be able to enjoy the fruit of their labour at the end of every month. But, what we inherited were empty treasury, huge debts, collapsed infrastructures, including none availability of power as well as many states, as well as some sections of the federal ministries not able to pay their workers’ salaries for several months.”

President Buhari, who later took time off to have a hand-shake with each journalist, appealed to them to cooperate with him in the onerous efforts at fixing the numerous problems facing the country.

He admitted that as a uniform Head of State he had a rough relationship with the media, saying however, that as a born-again democrat, he is ready to work in harmony with journalists for the purpose of collectively uplifting the economic, social and political status of Nigeria.

Buhari broke record of being the first President in a long time to have such a hearty meeting with the State House Press Corps, especially on his first day of resuming work as President of the country from Aso Rock. He has been operating from the Defence House since he was inaugurated on May 29. [myad]