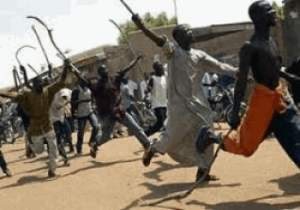 As attacks on some communities in Benue, Nasarawa and Taraba states by Fulani marauders continue, Tiv leaders in America have said that they are ready to fund their communities to defend themselves if the Federal Government failed to intervene.
The leaders added by threatening to draft their able body warriors into the war front to confront the fast invading Fulani herdsmen into their lands.
Vice President of Mutual Union of the Tiv in America (MUTA), Professor Joseph Zume said that the government at the centre has continued to look the other way while attacks targeted at Tiv communities are being perpetrated unabated.
“It seems there is a conspiracy to emasculate our people, make them not to perform their well-known vocation of farming very well, kill them, drastically reduce their number and possibly make them politically irrelevant.
“But the Federal Government has remained silent about it. We are therefore constrained to begin to fashion out a way for our people to be able to defend themselves if they are attacked.”
Also in a statement jointly signed by the President, Joseph Unongo and Secretary, David Agum, the group said the situation is deteriorating by the day as hundreds of their people are being murdered and others rendered homeless in their homeland and “strongly condemned the orchestrated attacks and killings of people in parts of Benue, Nasarawa and Taraba states by Fulani herdsmen and mercenaries.
“We warn that if the Federal Government of Nigeria cannot defend the Tiv people from the marauding herdsmen, we will be forced to mobilise the people to defend themselves.”
The group said their decision became necessary because the attacks by Fulani herdsmen are unprovoked, motiveless and rather gratuitous.
“It is disturbing that what started as a local dispute along the Benue-Nasarawa axis a few years ago, has now manifested as a well-orchestrated agenda to over-run Tivland.
“This is evident both from the expanded scope of the attacks and the sophistication with which they are executed. The most recent well coordinated attacks and devastation of Tiv communities in Makurdi, Guma, Gwer, Gwer-West, Kwande, Logo and Katsina-Ala local councils of Benue State are suggestive of a deeper plan than meets the eye, and we warn the perpetrators and their sponsors to think twice – it won’t be that easy.”
Unongo said that as Tiv sons and daughters in The Diaspora, they cannot fold their arms and remain mute as “communities at home are being ravaged and our people being killed, maimed, and rendered homeless by the Fulani and their cohorts.”