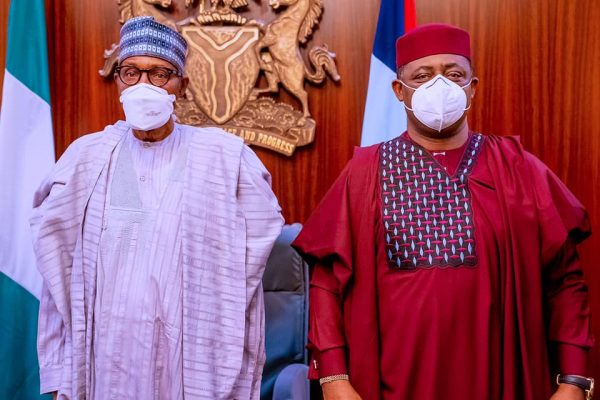 Chieftain of the opposition Peoples Democratic Party (PDP), Chief Femi Fani Kayode has returned to the ruling All Progressives Congress (APC), with a vow to join in putting to shame, local and foreign elements that are out to disintegrate Nigeria by way of war.

Speaking to newsmen today, September 16, shortly after an audience with President Muhammadu Buhari at the Presidential villa, Abuja, where he formally declared his defection to APC, Fani Kayode said: “Nigeria must not disintegrate and those that want us to end up fighting one another in a war will be put to shame.

“The most important thing for us today is we must not allow our country to fall apart based on disagreement and misunderstanding amongst one another.”

Fani Kayode, who was a foundation member of the APC before he crossed over to PDP, made it clear that he would join hand with progressive elements to move the country forward and save it from the hands of retrogressive elements, both local and foreign.

“The most important thing is that we work together as a people, as a country, and move our country together and fight and kill the terrorists and put to shame, the foreign elements and I emphasise that word, foreign elements, that want us to end up fighting one another in this country and turning our country into a massive refugee camp.”

Fani Kayode, who was a minister under the regime of President Goodluck Jonathan of the PDP, said that one of the reason for his return to the ruling party, is to appreciate the efforts that have been made, particularly in the last couple of years in terms of security, fighting insurgency, fighting terrorism, and most importantly, “is the appreciation of the fact that we must remain one as a nation, build bridges, work together to move the country forward.

“It’s very important for us to appreciate the fact that when we see that there are good things that are happening, we appreciate those good things. It’s not always negative and when the time is right, we change direction to join forces and join hands to move the country forward.

“Doing this doesn’t mean we’re enemies to anybody. All of us, even if we are in another party, the PDP or any other party or any other group, we can still work together across party lines, regional lines, ethnic lines, and religious lines.”

See also:  2023: If Jonathan Runs On APC Platform And I’m Asked To Step Down For Him, I Will Obey - Ayade

Fani Kayode made it clear that it didn’t bother him how people, especially his friends in the PDP would react to his defection at this time saying: “it’s left to them.

“I have many friends in the PDP. If you remember, in 2013, I was actually one of those that formed the APC. There were a few issues and I went back to PDP, but I think it’s an individual thing.

“As a party, of course, they may not be too happy, but I have no enemies there and I have nothing negative to say about anybody there.

I believe in moving the country forward together with everybody that believes in Nigeria and wants Nigeria to progress and I also believe that we must recognise the fact that there are two more years for this administration or there abouts.

” Whatever they say, whatever they choose to say, is entirely up to them. I have many friends there, let’s hope that they don’t feel too bad about it. We’re all Nigerians.

He said that the only thing that remains constant in life is change, stressing that it is wrong for people to hold him to what he had said in the past, adding that  if circumstances change he would always bow to superior argument and logic.

“For me, the primary cause today and let me say this, there’s no way I will renege on my fundamental core values and principles. Anybody that knows me will tell you that.

“I believe in certain things; how the country should be moved forward. I will fight for that from within this party to ensure it’s done. I believe in fairness and equity.”