Home NEWS POLITICS We’ll Take Our Seats Back From Those Who Defected, PDP National Chairman... 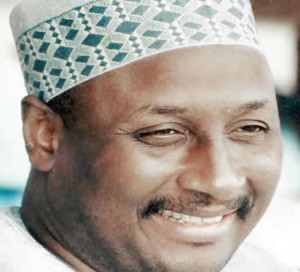 National chairman of the ruling Peoples Democratic Party (PDP), Alhaji Ahmadu Adamu Hu’azu has vowed that they would take back the seats belonging to the party from those who recently defected to the opposition All Progressive Congress (APC).
Mu’azu was referring to the governors of Kano, Kwara, Sokoto, Adamawa and Rivers states as well as members of the House of Representatives who won elections under the PDP but dumped it for APC.
The chairman, who spoke today at a unity rally in Kano to receive the former state governor, Mallam Ibrahim Shekarau into the party said that the honourable thing those defetors would have done was to resign from the party and their elective seats to test their popularity in the new party.
He said that through legal processes, PDP would unseat the defectors who have since forfieted the right to hold on to the seats that belonged to PDP.
Mu’azu said that PDP is the only national and broad based party that accommodates all shades of Nigerians, adding that entering PDP is like entering religion.
He said that in PDP there is enough for everybody without discrimination or superiority by one group over others.
The governor of Kano state, Rabiu Musa Kwankwaso, who jettisoned PDP for APC refused formally receive President Jonathan to Kano, even as the speaker of the House of Representatives, Alhaji Aminu Tambuwal, who is still a member of the PDP caucus was conspicuously absent at the rally.
The new PDP chieftain, Ibrahim Shekarau, who defected from the All Progressives Congress (APC) described the unity rally to welcome him as “an occasion for democracy and an occasion for choice.”
He said that the return of key former members of defunct ANPP and later APC was to show solidarity and loyalty to the President Jonathan’s government, even as he promised to continue to be loyal to the party and his administration.
“Mr. President, I wish to pledge my commitment and that of other members who made the choice to join the PPD with me.”
He also pledged to work with the President in order to realise the objectives of the ruling party.
The former governor used the occasion to thank the President for the various federal projects that have been completed and ongoing in Kano state.
While promising to continue to re-dedicate his life to the service of the people, Shekarau called on the President to do more for the people of Kano state by way of empowerment, especially by boosting agriculture.