Home NEWS POLITICS Why I Parted Ways With Kwankwaso, Gov Ganduje Of Kano Opens Up 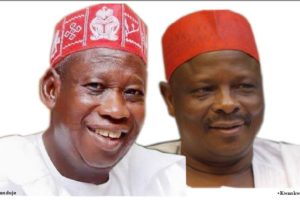 Governor Abdullahi Umar Ganduje of Kano State has said that he and other supporters of his predecessor, Dr. Rabiu Musa Kwankwaso left him because of what he called his ‘selfishness.’
The governor, who formally welcomed some members of the Peoples Democratic Party (PDP) that defected to the All Progressives Congress (APC), said that apart from being selfish, Kwankwaso is also an unrepentant person.
“It is natural to be a bit selfish but I have never seen anyone as selfish as Kwankwaso. It was such that he imposed his whims and caprices on all and exploited (all) for his personal benefit, as against the collective interest of all.
“All of us seated here were with him in the past and we made him what he is politically but had to withdraw from his persistent self-conceit.
“We had initiated reconciliations in the past but Kwankwaso is not the repentant type, it is either his bid that is done or he destroys everything.”
Chairman of the PDP in Kano, Rabi’u Sulaiman-Bichi, was part of the defectors alongside many Kwankwasiyya supporters, local government coordinators and former commissioners who served under Kwankwaso.
Governor Ganduje called on them to join hands with him in developing the state.
He assured them that they would be carried along in the development of the state.
“Those who took us to Election Petition Tribunal, to the Court of Appeal and Supreme Court, had only exercised their constitutional rights, as simple as that, hence our decision to invite the opposition to come and join hands with us for the development of the state.”