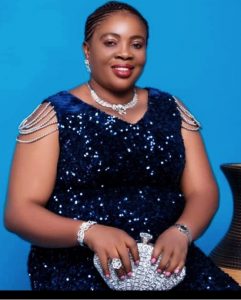 A female journalist and active member of Nigerian Association of Women Journalists (NAWOJ) Rivers State chapter, Gladys Nweke, has taken an oath of office as an elected vice chairman of Etche Local Government Council in River State, alongside the Council chairman, Obinna Anyanwu.

Speaking today, June 26, at the Thanksgiving service held at Seventh Days Adventist Church Umuomara Okehi 2 in Etche, Gladys Nweke acknowledged God Almighty for His blessings and upliftment in her Life.

She said: “Amazing Grace found me. God brought me from nothing to something, from nobody to somebody and am very grateful and will everly remain grateful to God.”

Nweke, who promised not to fail the church and Etche people, appealed to the congregation to always pray for her on the daunting task ahead, so as to serve her people diligently and in humility.

She acknowledged Hon. Chief Allwell Onyesoh, whom she described as a leader per excellence for finding her worthy to lead and serve the people of Etche in this capacity, while urging that the church and good people of Etche keep praying for him to live long to witness a better Etche he so desired.

The new vice chairman, who writes for Greenbarge Reporters online newspaper and hard copy magazine, thanked the Chairman of ELGA, Hon. Obinna Anyanwu for accepting her to work with him, promising to work with him diligently as to return the lost glory and make Etche people glad.

Chairperson of NAWOJ, Rivers State Chapter, Comrade Susan Serekara-Nwikhana, thanked God Almighty for blessing one of their colleagues to lead her people in the political capacity.

Comrade Nwikhana described Gladys Nweke as “a goal-getter, a dogged journalist, whose yes is yes and no is no, one who is friendly, lovely, intelligent, hardworking and goal-oriented lady with vision, whose lifestyle is worthy of emulation.”

See also:  2023: If Jonathan Runs On APC Platform And I’m Asked To Step Down For Him, I Will Obey - Ayade

She acknowledged that Nweke has never failed in her professional duty assigned to her, while appealing to the members of the church and Etche people to always pray for her so that her reign makes positive impact in their lives that would in turn make them proud of her.

Comrade Nwikhana thanked the Rivers State Governor, Chief Nyesom Wike for finding women worthy in leadership positions across the 23 local government area of the state, praying for God’s protection upon him and his household.

Also speaking, the Deputy Youth Leader, Alfred Nwafor on behalf of Chief Allwell Onyesoh, thanked the Church for the massive turnout of members and love shown towards their daughter, described Hon Nweke as one who is humble, dedicated, God-fearing and a mother who never disappoint in any activity giving to her.

He urged her to always remember her days of little beginning so as not to fail Etche people, who supported and made it possiple for her to be on the top.

On her part, the Etche Women Leader, Mrs. Charity Njoku, stated that while praying saw that the journey is going to be tough, and prayed for God’s wisdom upon her to lead her people, while assuring her of their full support any day and anytime, as to make Etche women proud.