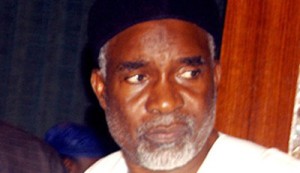 Embattled governor of Adamawa State, Admiral Murtala Hamman Nyako (rtd) has made it clear that he would not resign even as he gave an insight into why members of the state House of Assembly are after his job.
Nyako who answered reporters’ questions today after attending the launch of the steering committee of the Safe School Initiative at the Presidential Villa.
Governor was insisted that he would not resign even as he said that the impeachment has not reached a crisis point.
Nyako claimed that the state is calm, adding that the issue was before the court.
“I expect the lawmakers to obey the rules in anything they do. Well, it is in the court and the court said it was not well done. “We are hoping that if they want to do it, they will do it by following the normal process in whatever they want to do.”
Asked to confirm if he had tried to reach out to President Jonathan to come to his aid, the governor simply said: “not yet. It has not reached that crisis point.”
He however did not rule out the possibility of calling for help from the President when the need arises, expressing hope that the man would step in since the state had also been there for the President, he too would intervene when it matters.
“We have supported him all this time; he has supported us and in situations like these when Mr. President’s support is required, we will seek it.”
Nyako said he was not considering the resignation option, describing the suggestion that some former Heads of State had spoken to the President on his behalf as “excellent”
On the root cause of the crisis, he said:” Adamawa is a very interesting place. If I tell you we have 87 ethnic groups and the two religions are fairly balanced,  It means that being sensitive to each and everyone of us is very important. It is a place of intellectualism; everybody has his own point of view and you have a group of people who share a certain point of view. And until it changes, they will maintain that point of view. But we have been peaceful somehow and we will remain peaceful.”
On rumoured plans to defect back to the People’s Democratic Party (PDP), Nyako noted that:  “Quite frankly, you know how I joined the PDP and partisan politics in the first place. It is not really my field. My field is known. You know what I was before. We are straightforward; have two distinctions: loyalty and disloyalty; two separate pieces. But one of the interior politicians told me that there are a lot of things in between loyalty and disloyalty which up till this moment I have not appreciated. So, for me, disloyalty with this type of attitude with Nigerian politics of today you are likely to step on toes of a few.”
The Adamawa governor who was among the G5 governors who decamped from the PDP to the APC some months back, has been faced with a serious impeachment threat from members of the State House of Assembly for about two weeks.
While he has put in several measures to ward off the threat, the lawmakers and Chief Judge of the state had proceeded with the impeachment processes, relying on allegations of fraud and nepotism leveled against him.