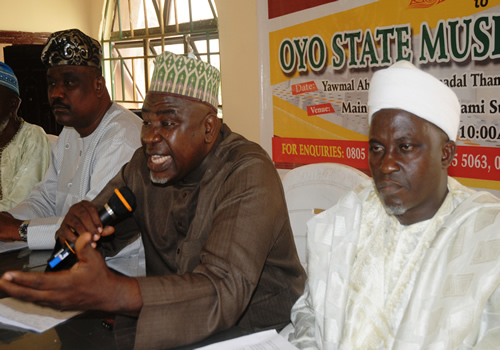 Yoruba Muslim leaders under the aegis of the League of Imams and Alfas have resolved not to have anything to do with the Presidential Dollars that are allegedly flying around the country, especially the religious groups, to influence Presidential election in favour of President Goodluck Jonathan, even as they have also decided to avoid the Presidency which has invited them to series of meetings.
One of the meetings, which was believed to have been arranged was meant to lure them into endorsing the Jonathan/Sambo ticket in the forthcoming presidential election.
The meeting, in which Vice President, Mohammed Namadi Sambo, was to represent President Jonathan, was earlier scheduled for Thursday last week in Akure, Ondo State but had to be rescheduled for tomorrow (Wednesday) in the same state for lack of adequate mobilisation.
Information has it that the Muslim leaders who might have been taught a lesson by the experience of their Christian counterparts that were recently enmeshed in a controversial N7 billion scandal that has caused a crack among Nigerian Christians, decided not to be involved in an “embarrassing” meeting that could cause a crack amongst them.
A similar meeting arranged with Yoruba Muslim leaders and fixed for Lagos by the Presidency recently was equally botched for the same reason cited by the League of Imams and Alfas just a day before it was to come up.
Investigation revealed that the leaders of the League contacted one another and resolved not to be part of any meeting at this time to maintain their neutrality with no leaning towards any political party or individuals.
The Akure meeting, said to be coordinated by the Chief Imam of Owo, Sheikh Ahmad Aladesawe, the Secretary-General of the League, who was vigorously mobilising his colleagues in the League might end up in a fiasco, given the reluctant posture of the other leading Imams in the region.
From Ibadan, Lagos, Markaz, Agege, Abeokuta, Ijebu Ode, Osogbo, Ilaro, Ado Ekiti and Auchi as well as other major cities of the region, the common question on the lips of the Imams was: “Why now?”
Following the failure of the Lagos meeting, the Presidency, in a bid to break the ranks of the Yoruba Muslim Ummah, embarked on an alternative meeting with the League of Imams and Alfas and another with the Muslim Students Society of Nigeria (MSSN).
The President of MSSN, Alhaji Sirajudeen Abdul Aziz, who volunteered to mobilise the leaders of the group for the meeting despite a resolution at a recent leadership meeting in Akure, Ondo State not to attend any such controversial meeting could be acting on his own.
The National Secretary of MSSN, Alhaji Ibrahim Giwa, was said to have warned Abdul Aziz against engaging in an exercise not approved by the executive arm of the body but the latter seems to have decided to go ahead all alone in his own name and not that of the MSSN.
Reflecting on the repercussion of such controversial action, the leadership of MSSN resolved to disown any such meeting at this politically volatile period and warned that nobody should use the name of the group for any selfish political gain.
Meanwhile no particular date has been fixed for the Presidency’s purported meeting with the leadership of MSSN that is supposed to come up at the Presidential Villa in Abuja before the presidential election on March 28.
In the same vein, the Muslim Community of Oyo State has vowed not to attend the meeting scheduled for Akure by President Jonathan to persuade South West Muslims to vote for him on March 28.
In a statement issued in Ibadan, the Oyo State capital today and signed by Alhaji Ishaq Kunle Sanni, its chairman, the Muslim Community said: “Our decision to boycott this meeting is in tandem with the decision of  others like Nigerian Supreme Council for Islamic  Affairs (NSCIA) and MUSWEN.
“The two apex Islamic bodies were totally averred to any meeting with the President until after the elections. It would be a disservice to the unity of the Muslim Ummah in general for any Muslim group in Nigeria to disobey the order of these umbrella organizations.
“The Muslim Community of Oyo State is not oblivious of millions of dollars changing hands to buy people’s conscience. This we are aware has created divisions in some religious organisations.
“Anybody who goes to Akure to meet the President from Oyo State is not representing the Muslim community of Oyo State.
“We urge people of Oyo State and Muslims in the South West to vote according to their conscience and not be deceived by political demagogues masquerading as friends of the people just for the sake of canvassing for their support only to dump them after achieving their aims.
“What these politicians are practising is nairatocracy and not democracy.”
[myad]