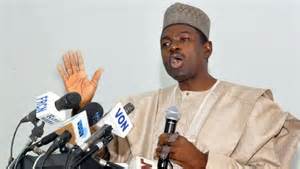 Former Nigeria information minister and now, governorship candidate of All Progressives Grand Alliance (APGA) in Nasarawa state, Labaran Maku has accused the Senate President, David Mark of Hypocracy, even as he asked the former chairman of Peoples Democratic Party (PDP), Dr. Amadu Ali to shut his mouth up.
Maku, who Amadu Ali referred to as “a dangerous boy” at the PDP Presidential campaign rally in Lafiya, the Nasarawa state capital yesterday said that the power-that-be both at federal and state level is against his ambition to be the state governor because he is a Christian.
Reacting to the barrage of accusation and curses which PDP chieftains hipped on him yesterday, Maku said: “the real issue in Nasarawa state is that some people within and outside the state believe that no Christian should ever be governor of Nasarawa state. Therefore, Mr. Maku is being persecuted purely for religious reasons.”
The former information admitted that he had high respect for Senator Mark and Dr. Ahmadu Ali and would not want to join issues with them, but that he finds it especially curious that Senator Mark has remained mute over the defection in his own native Benue State of former Minister of State for Trade and Investment, Dr. Sam Ortom and former PDP National Chairman, Senator Barnabas Gemade who have gone all the way to the opposition APC to contest for the governorship and senatorial positions respectively.
He aked: “why has Senator Mark not condemned these defections from his native Benue state? Why the undue attention on Mr. Maku and Nasarawa State?”
The import of these attacks on the APGA governorship candidate, Maku stressed, clearly shows that there is panic in the PDP in Nasarawa State following his emergence of Maku as Flag bearer of APGA.
He said that the attacks on him are orchestrated to sustain the status quo in Nasarawa, which is already leading to destruction of the state by insurgents and mercenaries.
“This development portends danger to the future unity and development of Nasarawa state and our dear country.
Maku said that his well considered decision to leave PDP for APGA was actually intended to bring out the real hidden issues that have continued to undermine the unity and development of Nasarawa State, adding that in doing so, he is fully aware that he will be blackmailed and maligned because he ever dared to challenge the status quo by those who want a divided state.
“It is equally curious how some of the PDP chieftains openly expressed their anger because I am campaigning for the president in Nasarawa State even though  my new party, the APGA, has adopted Mr. President as its own presidential candidate because of his sterling leadership qualities and many achievements in office..
The APGA governorship flag bearer said that he viewed the sustained attack against him as a desperate measure by some leaders of the PDP to distract him from campaigning to defeat their candidate and the incumbent in the upcoming governorship elections, adding that he is experienced enough in politics to know there is no way a sitting president will support him in an opposition party against his own party.
Last week at the PDP rally in Keffi to flag off the campaign of the state PDP governorship candidate, Alhaji Yusuf Agabi, Senator David Mark had accused Maku of being ungrateful because he left the PDP to emerge as the governorship candidate of APGA in the State.
Only yesterday, Tuesday, various speakers at the presidential campaign rally in Lafia repeated the same accusations.
But Maku insisted that he had never told anyone even while contesting for the governorship ticket in the PDP that the president was behind him, neither did he suggest to anyone when he decamped to APGA that President Jonathan supported his decision.
According to him, the PDP primaries were marred by irregularities, including the change of delegates’ list and the manipulation of religion to impose Alhaji Yusuf Agabi as candidate.
He said that some delegates’ lives were openly threatened at the ill-fated PDP primaries at Nasarawa town if they ever voted for him, saying that before he finally left the PDP, he followed the due process to seek redress over the highly bungled governorship primaries, including petitioning the PDP Governorship Primaries Appeal Panel under the chairmanship of the National Chairman, Alhaji Adamu Mua’zu on the irregularities and other anti-democratic activities that led to the imposition of Alhaji Yusuf Agabi as the candidate of the PDP.
He said that the Appeal Panel neither acknowledged nor invited him to defend the appeal he filed against the conduct of the governorship primary election.
Acknowledging that loyalty is crucial in party politics, Maku made it clear that despite that he had been a loyal party member and leader of the party in Nasarawa state for four years, he was schemed out of the PDP primaries on the basis of religion.
He asked a question: “why scheme out a loyal party member who stood by the party and defended its policies and programmes at the state and national level for many years only to turn around to use his loyalty against him?”
He asked his teeming supporters to disregard all insinuations and threats and sustain the tempo of the campaign for him and Dr. Goodluck  Ebele Jonathan to emerge as President of the Federal Republic of Nigeria and governor of Nasarawa State in this year’s general elections. [myad]