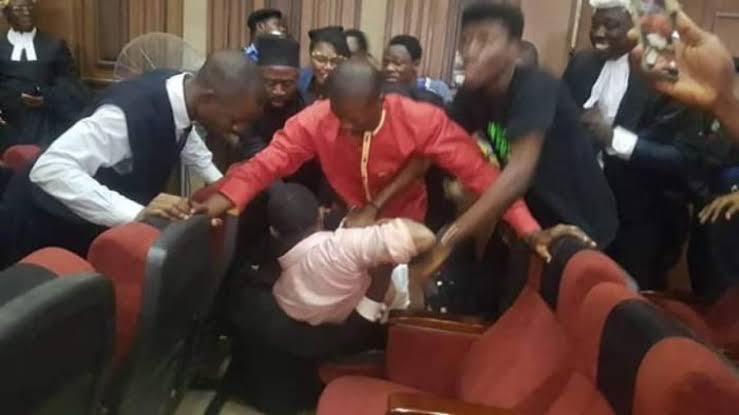 The Nigerian Presidency has described the invasion of the Federal High Court in Abuja by men of the Department of State Services (DSS) as a stage-managed ploy to attract national and international attention and sympathy towards the revolution monger and publisher of SaharaReporters, Omoyele Sowore.

This is even as the DSS denied that its operatives re-arrested Sowore in the courtroom after battling with his supporters.

In her Twitter account today, December 7, Personal Assistant to President Muhammadu Buhari on Social Media, Lauretta Onochie, stressed that DSS operatives did not invade the courtroom to re-arrest Sowore as was shown in video clips that went viral yesterday, December 6.

Onochie said that eyewitnesses had testified that the DSS did not enter the court room to arrest him, rather Sowore’s supporters dragged him in with the DSS official.

“Who Drama help? Every lie will expire, court room drama explained. So it was a stage managed drama in the court yesterday; Sowore pinned down by his supporters in a courtroom in order to give DSS a bad name.

“There was no gun. No batton. No pinning down. Just plain drama, planned and staged by his boys and girls. Kudos, but every lie has an expiration date.

“Many EYEWITNESSES have said DSS was OUTSIDE the courtroom, not inside the courtroom. Here’s one more eyewitness account as reported by Adeniyi Adegbomire SAN.

“A friend of mine, Wale Fapohunda, who was in court today when Sowore’s re-arrest was purportedly effected inside the courtroom has this to say about the incident:

“Suddenly Sowore’s people started dragging him with the DSS and they (Sowores team) dragged him into the court room. The judge seeing this, rose and went to her chambers.

“The DSS didn’t enter the court room to arrest him rather his supporters dragged him in with the DSS official. Nobody chased the judge out, she rose and went to her chambers on seeing squabbles. The DSS official left the court room and waited for him outside the court. Thank you all. Behold my eye witness account.

“Blackmailing government enforcement agencies was how our nation went into decay. It wont work this time. NO ONE IS ABOVE THE LAW. It appears everyone in that drama was part of the drama club. They harassed a Court officer who wanted them out as they were disrupting another court case. A Lawyer who looked bemused with the whole drama was lost for words.

“Drama will not help Sowore because Once you dramatise a lie to the members of the public to attract sympathy, you lose all of that sympathy when they find out you have misled them.

“I’m also of the opinion that the police look into these videos, (I have watched four) and charge those who deliberately misled the general public on this issue.”

Also, the spokesman for DSS, Peter Afunanya in a statement, said: “a critical look at the videos in circulation would convince any objective viewer that there was no DSS personnel during the entire period the Sowore crowd acted out its orchestrated drama,” DSS spokesman said in a statement.

“Its (DSS) personnel were never, at any time, involved in the incident.”