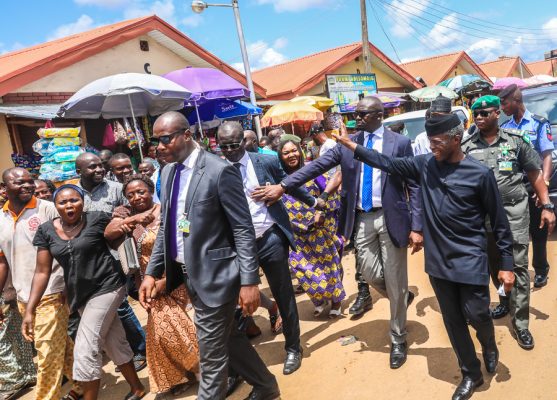 The Presidency has moved in to stop the raging dispute between the Nigerian Army and the indigenes of Abuja over 7,000 hectares of land cutting across Gwagwa, Idu, Zuba and Giri communities in the Federal Capital Territory.

Vice President Yemi Osinbajo, who was accosted last week by protesters as he went for official assignment in the Federal Capital Territory, has, according to his spokesman, Laolu Akande, already directed the authorities of the Federal Capital Territory Administration (FCTA) to submit to his office, a comprehensive report on the disputed land and what it has done to resolve the matter.
The Vice President, who had a meeting with a delegation of Gbagyi leaders comprising political office holders, traditional and youth leaders, at the Presidential Villa today, Monday, gave assurance that the government will adopt all necessary measures that will lead to the amicable and just resolution of the land dispute.

Professor Osinbajo said that he had briefed President Muhammadu Buhari on the matter and would find out from the Chief of Staff to the President, what the presidential committee constituted to look into the issues has so far done.
According to the Vice President, “what is very important now is that we do not allow a situation where things are not done according to the law and due process. It is also important that this issue is resolved amicably and justly.
Last week Tuesday, on his way to the airport to launch the Homegrown School Feeding Programme in Ekiti state, the Vice President ran into some protesters at Goza village. The protesters blocked Osinbajo’s motorcade prompting him to alight to engage with the angry youths, a move that culminated into today’s meeting.
Meanwhile, Senator Philip Aduda, representing the FCT at the National Assembly, was at the meeting with the Vice President, dismissed the claim by the Army authorities that the land was allocated to it and appreciated the intervention of the Vice President.
This was even as the Secretary of the Area Councils Services Secretariat, Senator Isa Maina said that the FCT authorities in an effort to address the issue has already proposed to allocate a plot of land to the Nigerian Army in Kwali.
He said that contrary to the directive by the presidential committee that all parties involved in the matter maintain status quo, the Nigerian Army has proceeded to construct structures on the disputed land.
On his part, the Emir of Jiwa, Idris Musa said that the indigenous people of Abuja are not against the Nigerian Army in any way but want a just and amicable resolution of the matter.