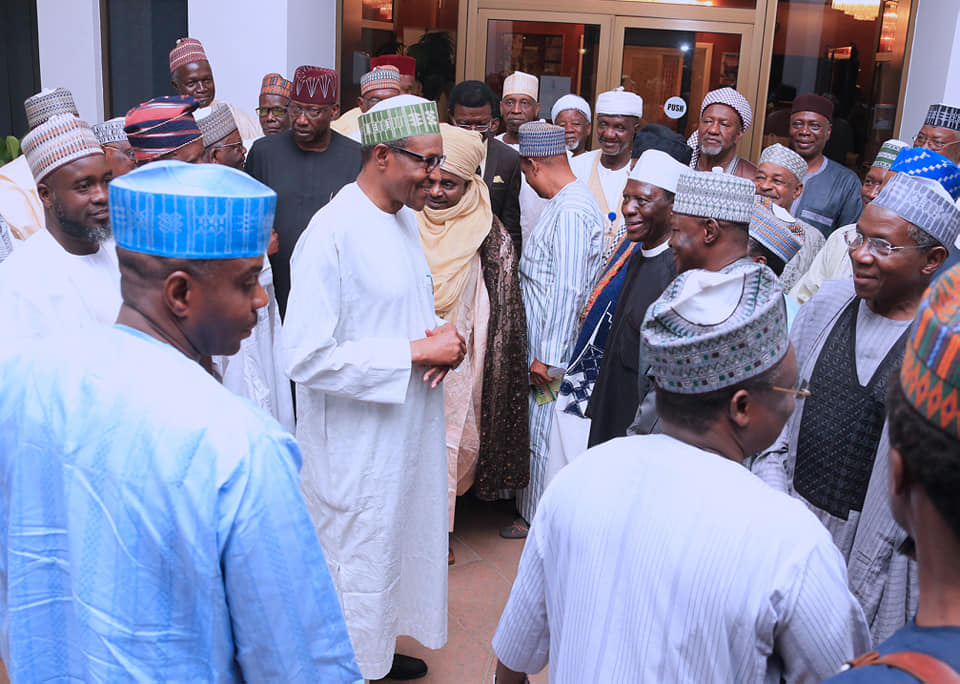 President Muhammadu Buhari has adjudged religious and ethnic cleavages by some Nigerians as injustice and corrupt acts.

The President, who hosted his personal aides that worked with him when he was military head of state between January 1984 and August 1985 at the Presidential villa, Abuja, stressed that recourse to the smokescreen of religion and ethnicity “is just corruption, pure and simple.”

Buhari then went down the memory lane, drawing lessons from his electoral battles at the courts in 2003, 2007, and 2011, where those who ruled against him were Muslims from the North, but those who defended him were Christians from the South.

“I was recently forced to talk to somebody I respect a lot about Nigeria. I said in 2003, when I started out, complaints about presidential election used to start from the Court of Appeal. The president of the court then was my classmate in secondary school for six years. Himself, myself and Shehu Musa Yar’Adua, were classmates. My lawyer, Mike Ahamba, was Roman Catholic and an Ibo man. My first witness was in the box. Ahamba said he needed the register of voters in certain constituencies and states to prove that votes were just allocated, and not true reflection of what existed in the constituencies. He asked them to record his request and sign. They did so.

“When they came to give judgment later, the matter was not mentioned at all. In the panel was another Roman Catholic and Ibo, who raised his hand and said, this is what Buhari’s lawyer had said. Did we write to those constituencies and states to submit the register? If so, why is it not in the judgment? They just shut him up. He had to write a minority judgment. Of course, he’s now our Ambassador in United States of America.

“I petitioned the Supreme Court. Who was the Chief Justice? A Muslim, probably a Fulani, from Zaria. After 27 months, we went. Ahamba addressed the court for 2 hours and 45 minutes. They went in, came out after about 45 minutes, and said they were proceeding on vacation the next day. They were away for three months, making it 30 months in all. When they came back, they dismissed the case within 45 minutes.

“In 2007, they repeated the same thing. Who was the Chief Justice? A northerner and Muslim. After 18 months, they dismissed the case.

“The third time, who was CJ? A Muslim, Fulani man from Jigawa. After 8 months, he dismissed the case. This bloody nonsense about Nigeria on ethnicity and religion is just corruption, pure and simple. Wherever we find ourselves, let’s pray to God that we maintain our faith. That’s all we have.

“I try to do my best, and pray to God to help me. May God Almighty give us the ways and means to continue to do our best for the country. Whatever religion we follow, let’s do it seriously, as finally, we would appear before God. Whether we believe it or not, it will happen. So, we better continue to behave ourselves.”

President Buhari described the reunion and interactive meeting as an “emotional one” for him, as he had not seen some of the people since 1985, when the military regime he headed was toppled.

“He was in Saudi Arabia, performing the hajj, when we were removed. The Saudi king said the coup was not just against us, but also against him, since Idiagbon was praying with him.

“He asked him to send for his family to join him in Saudi until it was clear where I was. Idiagbon said no, I want to go back, Your Majesty. If they kill him, let them kill me also.

“He joined the next flight and came back. I think there’s no way you can describe such loyalty, such courage. May his soul rest in perfect peace.”