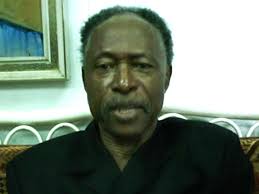 President Muhammadu Buhari has described the Chairman and Publisher of Vanguard Newspaper, Chief Sam Amuka-Pemu as the true gentleman of the press even as former Nigeria Vice President Atiku Abubakar felicitated with him as he clocked 80 tomorrow, Saturday.

In a congratulatory message issued by his senior special assistant on media and publicity, Mallam Garba Shehu, President Buhari said that it was a rare opportunity for him and members of his family to join millions of fellow Nigerians to rejoice with him.

The President noted that Nigeria has been well served by the presence of the legendary Sam Amuka in the media in the capacity of journalist and columnist with the Daily Times group, of which he served as Editor of the Sunday Times.

“It is impossible to forget his contributions to the Nigerian public through his famous column, Sad-Sam, which provided millions of compatriots much satirical, literary and even political communication satisfaction.

“The contributions by this veteran journalist to the progress of the Nigerian Press have been manifested not only in the growth and management of the Punch Newspaper and the Vanguard Media Limited, of which he became Chairman and Publisher in 1984, but also the principled positions he has consistently taken on political stability, accountability and the rule of law.”

Buhari said that Chief Sam Amuka-Pemu has provided a worthy example on the fruits of professionalism, industry and teamwork to achieve desired goals, adding that these traits can benefit even the humblest and most silent among professionals, as well as the society with whom they share their lives.

Former Vice President, Atiku described the 80 years sojourn on earth of the veteran journalist, publisher and businessman as “a milestone and a testimony to the life of moderation, discipline, kindness and contentment that he has lived.”

Atiku added that Uncle Sam’s life and business history and accomplishments makes him a role model in a new Nigeria that is gradually unfolding even as he commended him for remaining faithful to the journalism profession where over time, he transformed from a working journalist and employee to an employer, entrepreneur and mentor of journalists.

The former Vice President and chieftain of the All Progressives Congress (APC), described the newspaper proprietor as an epitome of hard work, dedication and humility recalling how as first Managing Director of the Punch Newspaper group, Uncle Sam discharged his duties with responsibility and distinction and laid a solid foundation for the newspaper which has ensured its survival and excellence till today.

Atiku Abubakar wished the Vanguard Publisher many more years of good health and continuous service to our country Nigeria adding that his life remains an inspiration to many Nigerians in all walks of life. [myad]