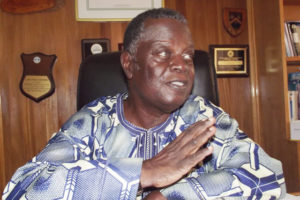 President Muhammadu Buhari has joined the Government and people of Lagos State in mourning the former Nigeria minister of National Planning, Chief Rasheed Gbadamosi who died yesterday, Wednesday.
The President, who condoled with family members, friends and professional colleagues of the late acclaimed economist, eminent industrialist, playwright and promoter of arts and culture, asked them to be consoled by the fact that his contributions in these diverse fields of life would be appreciated for a long time.
Buhari said that the nation will remain ever grateful for  the meritorious and exemplary roles Chief Gbadamosi played not only as a minister, but also  as a former chairman of the Bank of Industry (BoI) and the Petroleum Products Pricing and Regulatory Agency (PPPRA).

Meanwhile, the former Governor of Lagos State, Asiwaju Bola Ahmed Tinubu, has described late former Minister, Rasheed Gbadamosi, as a true Lagosian.
Tinubu, who is also a National Leader of the All Progressives Congress (APC), in a statement issued by his Media Office, today, Thursday, said: “I mourn the passage of eminent Nigerian and Lagosian, Chief Rasheed Gbadamosi. He died at a time when his wealth of experience would have come in handy for the challenges of nation-building. Yet, Lagos was happy to have him. And Lagos is proud of the life he lived and all he achieved.
“He was an achiever, economist, industrialist, arts aficionado and nature lover. He diligently served the nation as he served his Lagos home-state. He distinguished himself as Minister of National Planning and much later Chairman Petroleum Products Pricing Regulatory Commission (PPPRC). He will be sorely missed.
“He was a true Lagosian. Chief Gbadamosi was our ‘poster boy’ in Lagos. Born in Lagos, lived in Lagos, breathed Lagos; he loved his Lagos.
“Even though he had been ailing for some time now, but he was very active on the social-cultural scene. He died on the cusp of service of Lagos as Co-Chairman of Lagos at 50 Planning Committee.
“Chief Gbadamosi also recorded giant strides in the business world. He was Chairman, Ragolis Water Limited, AIICO Pension Managers and Lucky Fibres Nigeria Plc.
“I send my condolences to his family, to Governor Akinwunmi Ambode and the entire people of Lagos State. I also condone the arts community, with which he had identified all through his eventful life.
“I pray that Almighty Allah grant him Aljanna Fridaus.”