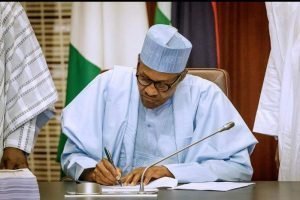 Contrary to social media reports that President Muhammadu Buhari has gone into self isolation following confirmation of his Chief of Staff,  Abba Kyari of being coronavirus positive, he reported in his office to carry out official duty,  but without most of the supporting aides.

A Presidency source confirmed today, March 25 that the President resumed work today at about noon and that no government functionary was around for the usual briefing.
In adherence to the directive by the Presidential Task Force on coronavirus, the federal executive council meeting did not hold today, being Wednesday. The Taskforce had, on Monday, announced the suspension of the council meeting until further notice.
The Secretary to the Government of the Federation/Chairman PTF-COVID-19, Boss Mustapha, also announced additional measures by government to curb the spread of the pandemic.
The Presidency had on Tuesday scaled down the number of personnel working in the Presidency Villa, including media organizations and their reporters in compliance to the current restriction in the Federal Capital Territory (FCT) against gathering of not more than 50 persons at the same time at any venue and social distancing policy.
The Security Department in the presidential villa were on hand today to enforce the restriction measure in the presidency.

It was noted that anyone whose name was not on the list of those cleared to enter the villa was politely turned back.