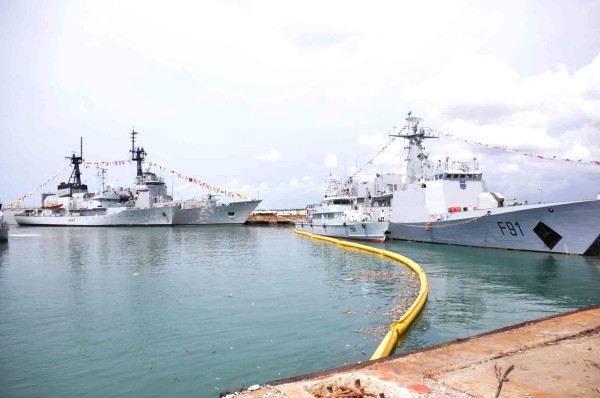 President Goodluck Jonathan, today, commissioned four large Naval ships in Lagos. They are the Nigerian Navy Ship OKPABANA, a High Endurance Cutter acquired from the United States of America; Nigerian Navy Ship PROSPERITY, a former Irish Navy fishery patrol boat, acquired purposely for use as a training ship; and Nigerian Navy Ship CENTENARY, one of the two offshore patrol vessels procured from China and Nigerian Navy Ship SAGBAMA, which was donated by the Peoples Republic of China.
Commissioning the ships, President Jonathan announced that the ships are part of 6 which will be commissioned for the Navy this year. He said that one of the ships which came from the United States was the 6th from that country since 2002.
The President said that the high dependence of the nation’s economy on offshore resources, as well as the enormous potentials of the maritime sector to contribute to food security and employment generation have made the provision of effective maritime security very imperative.
“Therefore, the Nigerian Navy, as the lead maritime security agency, deserves all the support it needs, to effectively carry out its statutory roles.
“In this regard, and in spite of other pressing demands, my administration has continued to support the fleet recapitalization objective of the Nigerian Navy Transformation Plan 2010 – 2020, which was formulated to support the realization of the goals of the Federal Government’s Transformation Agenda.
“This commissioning ceremony gives me opportunity to once again reaffirm my confidence in the competence and commitment of the officers, ratings and civilian staff of the Nigerian Navy.  I am glad to particularly note the achievements of the Navy in the fight against oil theft and other maritime crimes.”
President Jonathan reassured the Navy that his administration will not waiver in its support to the on-going capacity building effort it has started.
The President acknowledged the fact that this was the first time any Nigerian government would commission 5 Naval ships at the same time, adding that the last time such thing happened was when the then President Shehu Shagari commissioned three ships.
Speaking earlier, the Chief of Naval Staff, Vice Admiral Usman Jibrin commended the present administration for committing huge resources into the advancement of Naval operations, adding that the commissioning ceremony was a milestone in the history of the Navy.
According to him, the 4 Naval ships would be deployed into the effective patrol of the country’s territorial waters.
The Naval Chief also handed the 4 ships to their respective commanding officers.
NNS Okpabana was handed to Captain Majidadi Ibrahim while NNS Centenary was handed over to Captain Chidozie Donald Okehie. Captain BK Effiong was given the responsibility to command NNS Sagbama while Captain Musin Yahaya Abba will take charge of NNS Prosperity. [myad]