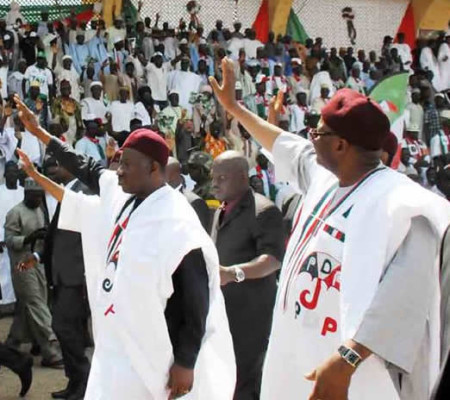 President Goodluck Jonathan’s bid to seek the support of Bauchi people ahead of the  February 14th Presidential election turned bloody yesterday.
Six operatives of the Department of State Security, DSS, were hospitalized after sustaining varying degrees of injuries from the fracas that ensued after the rally.
The President met a hostile crowd, with brooms and stones both on the road and at the rally venue.
The President landed at the Abubakar Tafawa Balewa Airport  around 11am and went straight to the palace of the Emir of Bauchi, Alhaji Rilwan Suleiman Adamu to pay homage .
When the President’s convoy drove out of the palace, some youths displaced brooms and posters of APC candidates while some showed that of President Jonathan and his deputy.
While some of the youths hailed the President, some merely displayed brooms to show lack of support for the President and some went violent.
The situation however got worse as the President’s convoy  entered  the Ibrahim Babangida Square for the rally, the hostile youths started throwing stones at the convoy.
It took the intervention of security men on ground to chase the youths away and reduce the impact of their actions even though some vehicles in the convoy had little scars.
The atmosphere at the venue was tense as the rally had to be rushed.
The violent youths who had been chased out by security men, made their way back inside as the President’s convoy was leaving the rally venue.
They attacked the last bus on the convoy which contained the DSS operatives with a big stone which smashed the windscreen and caused injuries for the occupants.
Six of the occupants were rushed to a nearby hospital.
While four of them who only needed minor treatment were discharged immediately, another two, a lady and a man who had deep cuts on their heads which required bandages and other serious measures were still taking treatment at the time of filing this report.
Officials told our reporter on ground that the two seriously wounded officers will be flied back to Abuja for further treatment as soon as possible.